Just before we left for our holiday trip, to see the grandchildren in Texas, I was going through a box of photos, only roughly sorted into big envelopes, trying to find a photo of my Mother. I did find it, see last week's Treasure Chest. However, as I was going through the envelopes, I also found one that did not hold photos - it had nine of my Dad's farm notebooks!

These notebooks may be just a bunch of scribbles to some folks, but to me, they are filled with memories. My Dad was a FARMER! He never wanted to do anything else, and he never did. He was a good farmer; from the late 1930s until his untimely death in 1977 after a three battle with a complex cancer, he was always an Iowa farmer. He was never without his little "seed corn" notebook and a pen or pencil. To this day, as my three daughters will attest, I always carry a pen or pencil... very likely a carry-over from his obsession. 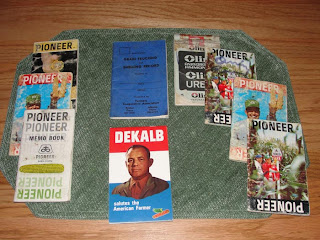 This particular set of notebooks dates from 1968-1973, when he was farming the largest acreages of his career - near 800 acres at one time. Corn and beans, primarily, on prime Iowa topsoil... using mostly Pioneer seed and some Dekalb, as you can note from the photo. The blue book, top center, was to record Grain Trucking and Shelling, from the local Farmers Cooperative Association - which he did. Each entry brings to my mind images of the pieces of ground to which he refers, where he notes, for the date, even to morning or afternoon, where particular bags of seed, with the variety, were planted. Here is a brief sample, from one page, in his distinctive handwriting:

This does also reinforce my desire to do some more work on occupational photos, that I have mentioned before. To me, these notebooks are Treasures related to Dad's farming occupation.