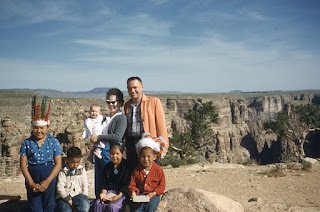 I had just graduated from Iowa State University and taken a job with Space Technology Laboratories in Manhattan Beach, California. Nancy, Annette (10 mos), and I drove across US Route 66 most of the way. Here we are just east of the Grand Canyon somewhere, with some Native American children. I'm sure one of their parents took the photo. I bought a small hand-weaved rug from them that now is at Annette's house on the mountain in Utah (a 'few' miles north of here!).

I just came across this box of photos, and am systematically scanning each one. The one below was taken the day before, I believe in the Painted Desert/Petrified Forest area, in eastern Arizona. [We didn't know it at this time, but a year later we were living in Winslow, between where these two photos were taken - small world!] 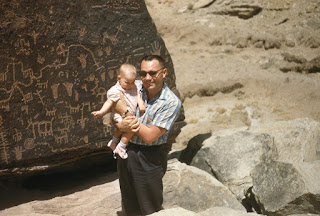 Annette and I are standing in front of "Newspaper Rock" - she has been fascinated by pictograph and petroglyphs all her life... wonder when that started...  ;-) 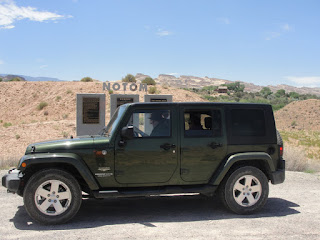 On our field trip south of the Capital Reef National Park last Tuesday, we visited several 'ghost towns' where about all that is left is their large or small cemetery. Above, we are parked in front of a commemorative sign for Notom, with the current Notom Ranch Bed & Breakfast in the background (over the back of the Jeep you can see the building). This is a fascinating area.

The Notom Cemetery is not one of the larger ones. We drove a few miles on the 'typical dirt roads' of the area to where it was located. 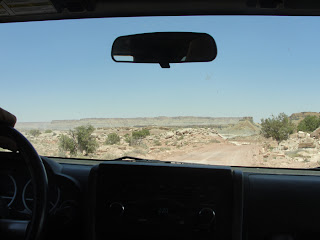 Here are some views of the area, when we got there. 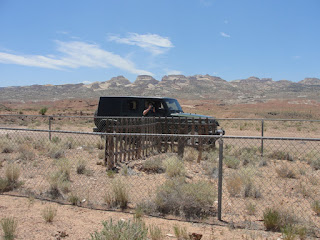 Above, you see the Jeep parked by the Cemetery (wire fencing), with the same mountain formations in the background as above, by the Notom sign. Those are the south view of the Waterpocket Fold in Capital Reef National Park. You have to really want to see them, to get this view. 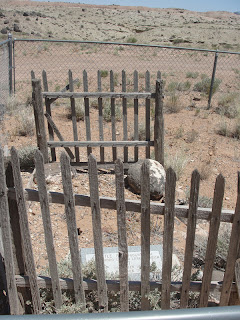 Inside the wire fence, each grave is marked (and was protected earlier) by the wooden fences. Above is one, below is another. 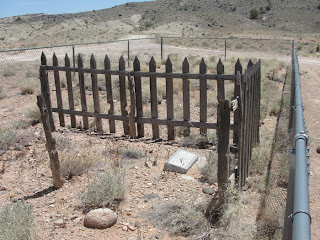 Even more interesting to me, perhaps, were the two gravestones with more recent markers: 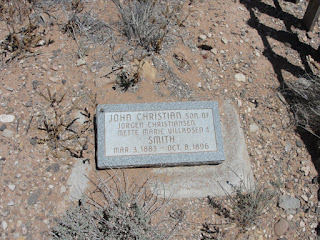 This was a young man who died at 13 years (1883-1896), John Christian Smith. His father was Jorgen Christiansen - a Danish immigrant (Danish surnames are a story in themselves). In the Wayne County History Class I attended the first Friday of our Utah visit, this year, we learned much of the Mormon Danish settlers in the county of this time period. [Note: I'm not Mormon, but I am 1/4 Danish - so I was especially interested] 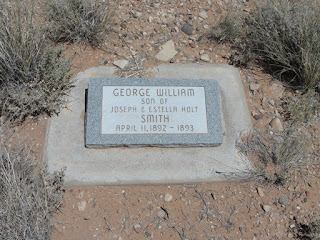 Note the second marker was for an infant, less than a year old. His surname was also Smith.

These markers were no doubt placed more recently by family descendants. Steve Taylor, the local historian, has traced the others known to have been buried in Notom Cemetery, even though they are not as clearly marked.

A most unusual Cemetery, I just really wanted to share with you.

It's Monday, What are You Reading? Mastering Genealogical Proof

It's Monday, What are You Reading?
Mastering Genealogical Proof
by Thomas W. Jones 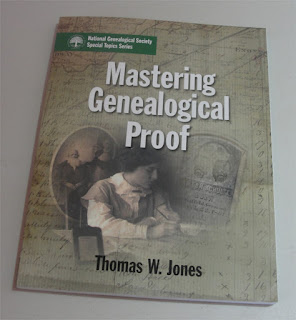 This post is the sixty-second entry for this meme suggested by Sheila@ One Persons Journey Through A World of Books. [Entries 22-25 in the series were posted at  the Dr. Bill Tells Ancestor Stories]

My oldest daughter, Annette, was good enough to get me a copy for Father's Day, and got one for herself at the same time. I had written about the book earlier, and am looking forward to spending more time with it.

From the website for the book, at The National Genealogical Society:

"Mastering Genealogical Proof aims to help researchers, students and new family historians reconstruct relationships and lives of people they cannot see. It presents content in digestible chunks. Each chapter concludes with problems providing practice for proficiently applying the chapter's concepts. Those problems, like examples throughout the book, use real records, real research, and real issues. Answers are at the back along with a glossary of technical terms and and extensive resource list."

You can order your copy from the link, above.