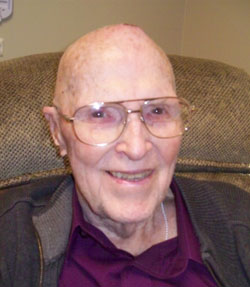 I was very pleased to be able to attend the Celebration of Life of my Uncle Leo, my Mom's older brother, last weekend, in Pella, Iowa. He had a very full life. He and Ida were married for 77 years. Today is our 57th Anniversary... just 20 years to go to match their outstanding experience!

Leo Millard Kinnick, age 99, passed away peacefully from natural causes on Monday, July 25, 2016, at Jefferson Place in Pella, Iowa. He was born in Coon Rapids, Iowa, to parents Paul and Dorothy (Sorensen) Kinnick on March 21, 1917, as the oldest of their 3 children: Leo, Eileen, and August Edward (Buzz).
As a high school student in Coon Rapids, he was an avid football player and sang in many vocal ensembles, activities that he continued to enjoy throughout his life. During these high school years, he would just happen to leave his house after lunch, at the same time Ida Marie Bell was walking back from her lunch with friends, conveniently offering to carry her books.  And thus a lifelong love story began which lasted 77 years. Even with these distractions, he still managed to graduate as salutatorian of his class.
After high school, Leo attended and graduated from Capital City Commercial College in Des Moines. When first married, Leo worked on the 80 acre family farm in Coon Rapids (no electricity, no running water, a hand crank phone, and field work done with horses and mules), but shortly thereafter he and Ida Marie moved to Rolfe, Iowa, where they helped Ida Marie’s father run his dairy farm of 45-50 milk cows. Their first daughter Karen was born on the Rolfe farm. A year and a half later they moved back to Coon Rapids where they opened a small café and lived on the floor above it. They sold hamburgers for 5 cents, and Karen entertained customers with song and dance, standing on the counter top. A short time later, Leo’s dad Paul, a banker in Coon Rapids, told Leo about a bank job opening in Lohrville, Iowa, and encouraged Leo to apply.  In 1940, Leo moved his young family to Lohrville, to be paid $80.00 a month in the new job. He became active in the community, and was the cashier of the bank for roughly 30 years. Daughter Kathleen, son Kelton, and daughter Karla were all born in nearby Lake City. When all the children were on their own, Leo took a job in a Fort Dodge bank for a short time, and then moved to Lenox, Iowa, serving in their bank until he retired in 1983. After “snow-birding” in Tucson, Arizona, a couple years, they moved to Tucson where they cherished the warm weather for about 20 years, and could watch their two youngest granddaughters grow up. In 2007 they moved back to Pella, Iowa, to be closer to more members on both sides of the family.
Music, sports and dance were always Leo’s biggest interests, and he saw that his children took part in those as much as they could. Gifted with a fine natural tenor voice himself, he sang in church choirs for many years, soloed for many special occasions, but he also sang in the Calhoun County Chorus, the Fort Dodge Glee Club, the Creston Glee Club, the Tucson Barbershop Chorus, and numerous barbershop quartets along the way. He loved Guy Lombardo, Lawrence Welk, the Mormon Tabernacle Choir, as well as many university choral groups, and even opera as sung by his youngest granddaughter. Leo attended dozens, if not hundreds, of dance recitals through the years, and one of his most recent TV favorites was “Dancing with the Stars”. He enjoyed seeing his children, grandchildren and great grandchildren experiencing the same joy in music, sports and dance that he did.
It was Leo’s love of football that made him the “neighborhood dad” throughout the 1950s. There were many summer and fall evenings when the neighborhood kids would gather to have Leo tell them to “go long” and he would hit them with nice soft passes. And the faces would be so attentive when he explained “how he did it when he played for the Chicago Bears”. It took many years before both family and friends realized that the Chicago Bears were just a passion, and that he really hadn’t played for them. But nevertheless, the story has flourished and been passed through several generations.
Leo served as a school board member of the Lohrville Community School, was a Boy Scouts leader, treasurer of the city of Lohrville for 25 years, a member of the Iowa Bankers Association and treasurer of the Salvation Army.
Besides his parents, Leo was preceded in death by the love of his life, Ida Marie (Bell) Kinnick, his sister Eileen Smith (Olson), and son-in-law Richard Henak. He is survived by his children Karen Henak, Kathleen (Kathi) Lucas, Kelton, and Karla, son-in-law Ken Lucas, brother Buzz, sister-in-law June Patrick, six grandchildren and nine great grandchildren.