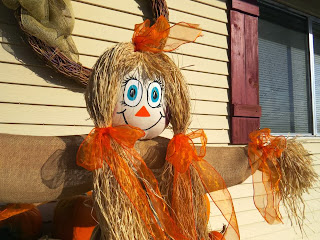 "The Homeplace Country Inn was tastefully decorated for the annual Halloween observance. Pumpkins lined the porch that was now the entrance to the Inn. A scarecrow sat prominently on the rocking chair near the entrance. The Heritage Room was decorated with fall colored leaves, corn shocks, with black cats and half moons on the walls. Some of the staff members were dressed as witches, others as ghosts.
Especially since the renovations were completed, the Inn had been a popular venue for families to bring their children for Tricks and Treats in the evening with two or three simple game events available and safe and reliable treats for all. During the day, these activities were being set up and each of the employees had specific responsibilities that they enjoyed carrying out, getting into the spirit of the season.

She (Karen) circulated around the reception area, checked the front porch, and then went to the Heritage Room where the Halloween reception proper was all set up. Four young ladies were already on hand and making final preparations for the early arrivals. Some families always seemed to prefer to arrive “too early” and she didn’t want to be there to greet them. She’d come back out about 6:15 to greet and help out as the bulk of the visitors arrived. She did enjoy seeing how the youngsters dressed up each year."

The Book of Me, Written By You - Prompt 9: Halloween

The Book of Me, Written By You
Prompt 9: Halloween

Prompt 9: Halloween
Have you ever participated in a Halloween event?

Rarely, but yes, a significant one - must have been 1973. I was a personal assistant to Governor Robert D. Ray of Iowa, and then Deputy Commissioner, Iowa Department of Social Services. The governor hosted a Halloween in the Governor's Mansion, Terrace Hill. 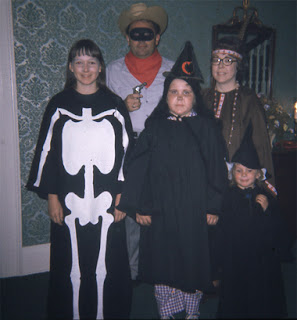 Guess you can see I dressed as the Lone Ranger, my wife was an Indian Princess; Annette was a Skeleton, an Allison and Arrion were witches.

It was a great experience, once, but not something we had any desire to duplicate. We are definitely not "party animals!"  - though it is hard to tell from this photo... we seem to be having a great time! ;-)

Email ThisBlogThis!Share to TwitterShare to FacebookShare to Pinterest
Labels: The Book of Me 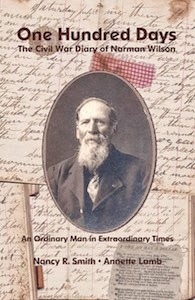 My wife, Nancy, and daughter, Annette, put the finishing touches on this book this week, culminating several years of research, writing, and creative design into one final product (not available yet, but we'll let you know when it is). Now available at Amazon.com. 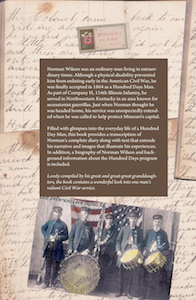 The Book of Me, Written By You - Prompt 8: Time Capsule

The Book of Me, Written By You
Prompt 8: Time Capsule

I'm going to treat this one very lightly. I do so many things to preserve what I think is important, taking the time, right now, to talk about, in this format, simply doesn't fit. Sorry, if this offends anyone. I think we each have a prompt or two that "doesn't fit." This is one for me.

Just a few words, in general. As far as personal things, and physical things, we are exceptionally fortunate that our three daughter are our best friends. We all talk about things such as this fairly often. There are/should be no surprises and hopefully no mis-understandings. Besides that, we've already downsized to very little, anyway!  ;-)

I continue to write, and I expect my various writings to be my legacy… to the extent there may be one.

Email ThisBlogThis!Share to TwitterShare to FacebookShare to Pinterest
Labels: The Book of Me 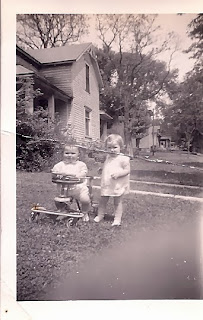 75 Years Ago This Week began March 1, 1938 - my mother and father were preparing to get married later in the month. I'm continuing this meme, from time to time, as issues warrant.

Selected diary excerpts from Eileen's diary, from this week, 75 years ago:

This is a "Catch Up" article that appeared in the paper related to my earlier post - when the same photo was used.

My comment:
The one little reminder/surprise here is that they were living in Bradgate, when Karen was born. I'm sure I knew that, but it certainly was not a fact I had in my mind, for my first cousin. Leo was working in a dairy there, as I recall. Bradgate was on the west edge of Humbolt County, three counties to the north and one county east of Coon Rapids. 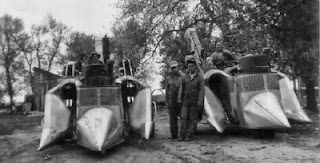 Picking corn in Iowa in the 1950s - think my Dad is on the right, on tractor. 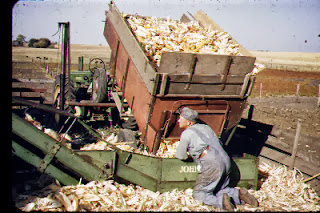 Love photos of people at their work! ;-)

The Book of Me, Written By You - Prompt 7: Grandparents

The Book of Me, Written By You
Prompt 7: Grandparents

"The Book of Me, Written By You" is a GeneaBloggers project created by Julie Goucher of the Anglers Rest blog.

The concept: A series of blogging and writing prompts that help family historians capture their own memories and write about themselves.

What were their names?

Where were they from? [All spent their married years in Iowa, by the way] 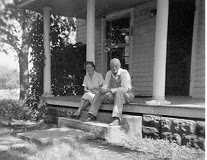 This is how I remember Paul and Dorothy Kinnick, my maternal grandparents. I have lots of photos of them, just go to my labels and put in their first names to see a few of them. This was their little house in Bayard, Iowa - during the 1950s and 1960s, I suppose.

Not the greatest photo, but about the only one I have of them as adults, together (probably 1921-22). He worked hard on his farm and his machine shop - he was know far and wide as a water locator and driller. The machine shop on "the homeplace" is another whole story of its own! ;-) In the family, they were always Mom and "Pop." 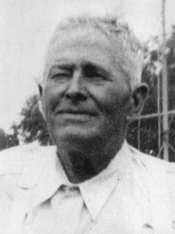 This is Bill Smith, whom I was named after, about a year before he died, in 1938.

What did they do?


Did you know them?

I grew up with my maternal grandparents, yes; all three of our daughters knew them as well, into adolescence. He lived to 75, she to 95.
My paternal grandfather died (at age 70) a few months after I was born; his wife had died about 25 years earlier. He did not remarry.

My additional comments: I was fortunate to know and be close to both a grandfather and a grandmother. They were each loving and caring in their own way. It is sad not to have known the other set; but I realize many folks go through life knowing none. I'm happy, as are my children.

This is another interesting photo received this week from Will Grapes, one of my Nebraska Smith cousins, from our continuing series of emails. When Michael Smith (Schmitt), our great-grandfather, arrived in the Quad Cities area, before the Civil War, he and his family lived in or near the little hamlet of Hampton, IL. [Reminder: Michael, early on, before he went off the to Civil War, adopted the Smith surname. The rest of his family (parents and siblings) seem to have all retained the Schmitt spelling.]

This photo was apparently taken in about 1970. Most of these building likely were not there when he was, but it gives a 'feel' for the area. Laurel, another of the cousins, added this thought on the photo:
"The brick building far off looks like "Blacks Store" built in 1849. It still stands today and is on the National Register of Historic Places. Now known as Bretton and Black Museum. In fact it looks like all of those buildings are still there. They are located on 1st Avenue right next to the Mississippi River. Between 6th and 7th street."

The Book of Me, Written By You - Prompt 6: Journals and Diaries

Do you keep a journal or diary? No… so those next prompt questions are irrelevant.

I have tried a few times, but it just is not something that is in my "bag of tricks," so to speak. The longest stretch was less than 18 months, back in the early 60s - very short entries, in a '5-year' diary...

I write a lot, but not in journal or diary format. My several blogs have been the closest I come, and, in recent years, many of these have information that is common to them.

Have you inherited any? Yes, my brothers and I have our mother's diaries, from 1932 to 1999 - her entire adult life. They are the diaries of an Iowa farm housewife who grew up in a nearby small town. She never lived outside a 10-mile radius, so they have some interest, is what they are. She started as a high school freshman. I have transcribed 1936 and it is on-line. Some of 1937-38 are online, as I've looked at "75 years ago." I will continue to read and interpret them, as time goes by. Many of you have enjoyed reading these snippets.

Do you intend to pass along your journals or destroy them? I generally do not destroy any family information.

My additional comments: Really not a lot to contribute here. This blog is my primary "write about myself" venue. I've written Sharing Memories on Sunday posts that tell of my early years. My Retirement blog is chronicling my later years. My children, and grandchildren, read them all, and have access to them all. I guess that is the important part.

Email ThisBlogThis!Share to TwitterShare to FacebookShare to Pinterest
Labels: diary, Journal, The Book of Me

75 Years Ago This Week began March 1, 1938 - my mother and father were preparing to get married later in the month. I'm continuing this meme, from time to time, as issues warrant.


Selected diary excerpts from Eileen's diary, from this week (and a day), 75 years ago:

… Alf Hetland put in the phone in the morning. Talked to the folks. … Did up the work and then listened to the World Series in pm. …

My comments: Getting chilly already this fall. Need a heater.

Lyle Kinnick was first cousin of Mom (Paul's brother, Robert's, son). They had stopped by a couple weeks before to ask Mom and Dad to 'stand up with them' - interesting to see how this wedding was handled.

They finally got a telephone… didn't need to drive the few miles into town, or up to his Dad's place, to talk to parents.

"Dizzy Dean, who had helped carry the Cubs to the National League pennant despite a sore a rem, ran out of gas in the Series as the Yanks crushed the Cubs again (4-0) as they had in 1932." Wikipedia 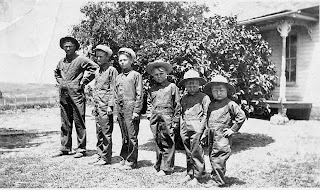 These are Grapes 'men' and their hats. I posted full family photos, earlier, but this one really caught my eye, of course, because I'm the oldest of five boys... on photo like this, of us, though.

Thanks to cousin Will Grapes, again, for sharing. His father is one of these boys. What a line-up! I'd love to more about the coveralls and the hats (headgear!), of course. What great memories to share!