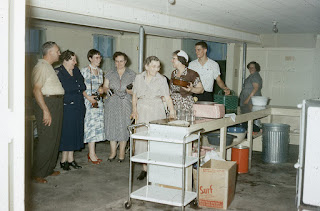 This is a photo I took in 1955 in the basement of the 'new' addition to the Star Church of my youth, near Coon Rapids, Iowa. The occasion was a June gathering of what we then called the annual Kinnick-Williams (or Williams-Kinnick) picnic. It was the family of my maternal grandfather, Paul Kinnick - see this post for his siblings and their spouses - well represented above. His father, of course, was Kinnick; his mother was Williams.

The three in the middle, above, represent the "Williams" side - Francis (Williams) Keck (center, white hat), her son, Bill, behind her, her mother, Clara (Hull) Williams, in front.

The large gathering sort of went away, for many years - however, in more recent years, the Kinnicks have been getting together in Coon Rapids - in June. I won't be there, this year, but did attend a couple of years ago. Fun family times!

Posted by Dr. Bill (William L.) Smith at 2:14 PM No comments: Links to this post

My personal ancestry is one-quarter Danish, so any news of the Danish Immigrant Museum in Elk Horn, Iowa, is of interest. Here is the latest from my Hometown weekly newspaper:

Elk Horn
Museum plans $3 million expansion
The Danish Immigrant Museum has announced plans to construct
an 8,000 sq. ft. curatorial center at its location on the western edge of
Elk Horn. The center will be located below ground on the west side
of the present building and will feature an environmentally-friendly
green roof. The project cost estimates are $3 million -- $2 million for
construction and $1 million to be invested in the museum’s endowment
to meet increased operational costs. To date, over $2.3 million
has been raised or is anticipated, though construction will not begin
until the $3 million fundraising goal is reached. “Our museum is the
only museum in the country dedicated to preserving artifacts of the
Danish American community here in the United States,” said the museum’s
executive director, Dr. John Mark Nielsen. “The planned curatorial
center will assure that the museum has appropriate space for
expanded artifact collection and for creating traveling exhibits that
will be shared with museums across the country and in Denmark.”
An initial gift of $100,000 in November 2011 from Omaha museum
members, Bill and Berniece Grewcock, enabled museum staff to work
with conservation professionals and AHTS Architects of Waterloo,
Iowa, in designing the planned expansion. The resulting plans have
been shared with potential donors, which led to a $1 million gift from
an anonymous donor family. The museum has also received word
that it was the residual beneficiary of the estate of Richard Hellman
of Oceanside, CA and formerly of Atlantic, who died on March 6 of
this year. “I met with Richard annually since coming to the museum
ten years ago,” Nielsen said, “and it was always his hope that his estate
gift would be significant enough to name the expanded space
after his parents, Peter and Karen Hellman, who were Danish immigrants.”
Audubon County Advocate Journal 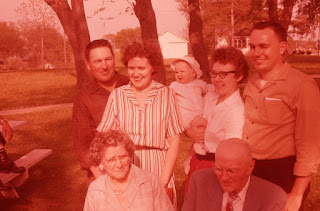 I'm approaching the 1000th slide scan, and came across this one earlier this week from May 1941.
You know I love multi-generational photos, and this is a 4 generation image.
Our oldest daughter, Annette, of course, along with Nancy and I on right. My parents, Pete and Eileen (Kinnick) Smith, on left, and, of course her parents in front, Paul and Dorothy (Sorensen) Kinnick.
This was at a picnic in the Bayard, Iowa, City Park near their home, about 10 days before we left Iowa (I had graduated from Iowa State University) and moved to California for my first job there.

Review of '13 Ways to Tell Your Ancestor Stories' on Amazon

Review of "13 Ways to Tell Your Ancestor Stories" on Amazon 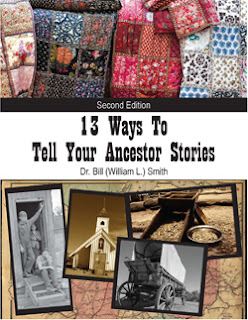 Great suggestions for using the workbook:

"My local genealogy society is using Dr. Bill's book as a workbook for our family history writer's group. He lays out all of the basics in an easy, understandable way. The book has been very helpful in getting people started writing about their ancestors and telling family history stories. We have added this book to our genealogy society library." 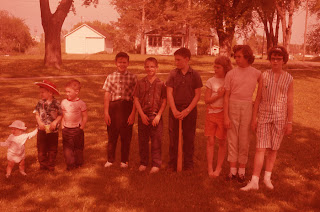 3 brothers and 5 younger first-cousins were among those participating in a "Good-Bye" - send-off - picnic in the Bayard, Iowa, City Park, in May 1961, Nancy, Annette and I were about to leave for California following my graduation, in a few days, from Iowa State University.

Annette, of course, is in the photo, far left, in her spiffy hat.

There are some cousins in this photo that don't appear too often in my photos.

P.S. The red coloring, of course, is due to the the combination of age of the slide and the cheapness/low quality of the 35mm film being used that day!  ;-)
Posted by Dr. Bill (William L.) Smith at 3:00 AM No comments: Links to this post

This is the first Book Blog Tour for The Homeplace Series, a continuing Family Saga, another historical fiction book.

A secondary character in Back to the Homeplace is discovered dead near Oak Creek in the opening sequence. The reporter, Penny Nixon, for the local paper, the Oak Springs Enterprise, gets on the story, but gets almost too close to the murderer… 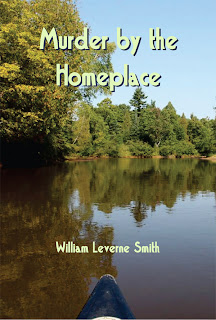 Available in print or kindle editions: This is one of those photos where you might say: "What is your caption?" My daughter, Annette, kissing my uncle Buzzy is the focus, but look at her uncle Tom, to the left, Annette's great-grandparents back left, and, Bryan is crying...


This is a bit of an unusual obituary for me to post, but it is no less important. I've recently been systematically scanning my slides from the early 1950 through mid-1970s. One slide I came across from April 1964, brought back memories that have stayed with me clearly for these nearly 50 years.

Lewis Bowler and his family were our neighbors in St. George. In the photo, my 3+ year old daughter, Annette, is standing (in the middle) with the Bowlers, on Easter, as I recall. Annette and their daughter, Mary Alice, participated in a lot of activities together in the months we lived near each other - a couple of houses apart. I was in the Air Force, and we moved within a year or so, but the Bowlers were wonderful friends, while we were neighbors. Fond memories. 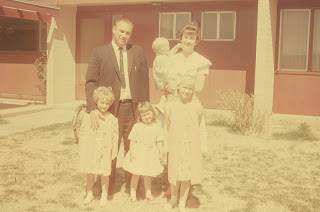 We found this Obituary that brought us up to date on the family, through the years!

After graduating from Dixie High School, Lewis served with the US Army during the Korean War. He married Dorcus Nowers on September 23, 1955 in Beaver, Utah. Their marriage was later solemnized in the St. George Temple on December 19, 1962.

Lewis was the service manager for the St. George Mountain Bell office and retired after 35 years of service. He then opened Bowler's CCom, a communication repair and sales business for 20 years, which he operated until January of 2005. He was past president of the St. George Lions Club and district governor of the Southern Region of the Lions Club. He served on the Southern Utah AA Council and the Five County Government Board. Lewis had many church callings. He was the Bishop of the St. George 8th Ward and transient Bishop of the Southwest Utah Region. He also served on the St. George Stake High Council and was a High Priest Group Leader.

He is survived by his wife of 51 years, daughters; Lu Ann (Michael) Pickett of Las Vegas, NV, Mary Alice (Jerald) Hunt of Enterprise, UT, Nancy Ellen (Kevin) Holyoak of St. George, UT, son; Scott Lewis (Kristen) Bowler of St. George, UT, 14 grandchildren and one great granddaughter. He is preceded in death by both parents, sisters; Jean Bowler Nelson and Maxine Bowler Lloyd.
The family would like to thank the staff of Dixie Dialysis Center and the Red Cliffs Rehabilitation Center for their devotion and support of our husband and father. A special thanks to Dr. Clark Staheli for his patience and extension of care and support.

Thanks to cousin, Laurel Brunken, and his sister Candy, for these memories: 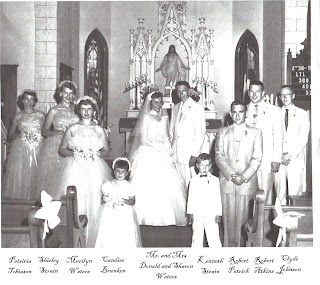 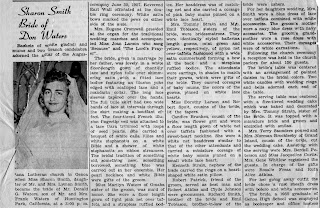 Summer 1955 visit to our Iowa farm home, from their Nebraska home, Sharon and her family. 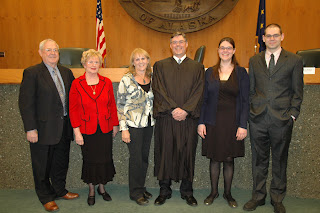 Sometimes posting a current photo image is an important part of 'telling our ancestor stories.'

Today is such an occasion. This past Friday, Judge Joel H. Bolger was installed as the newest member of the Alaska Supreme Court, having moved up from the Appeals Court.

Joel is my brother-in-law; my wife, Nancy's youngest brother. We are all so proud of him. We so wished we could have been there, in Anchorage, to share the moment. Nancy's older brother, Bob, left, and his wife, Carol, represented our family. Also in the photo are Joel's wife, Cheryl, and their children, Stephanie and Jackson. Congratulations to the whole family on this memorable life event!