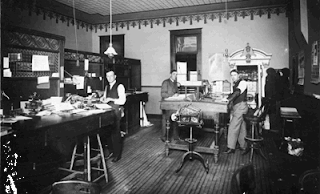 Paul Kinnick has gone into farm service, leaving the State Savings Bank rather short of help. But then, under the order to work or fight every man who can do farm work, and Paul knows how, must get into it. The boys overseas and the folks who live in town must be fed somehow.

Len (sic - Lem) Williams has completed the cement work of the addition to the Fred Davis Cafe. The front stairway to the building is being taken out. It is rumored that the Davis building will soon be used for a “movie” show in connection with the Cafe.

The recent shipment of knitted goods made by the Red Cross Chapter at Coon Rapids and forwarded to the soldier and sailor boys’ consisted of 93 pairs of socks, 77 pajamas and 50 sweaters—a large amount of work for the month of June.


My comments on the three items, in consecutive order in the column, caught my eye this week:

1. My Maternal Grandfather, Paul Kinnick, left the bank and went to work on the farm, apparently to avoid being called into the military. I had not known this before. He and Dorothy would have been coming up on their fourth wedding anniversary. Son, Leo, was about 15 months old, and Dorothy would have been pregnant with Eileen, to be born in December 1918. An interesting perspective of 100 years ago.

2. Williams would have been an uncle of Paul (mother’s brother). Assume this is the movie theater we all went to in the 40s and 50s as we grew up…