The Book of Me, Written By You - Prompt 17: Toys and Games

The Book of Me, Written By You
Prompt 17: Toys and Games

My Lionel Train from 1952, which I have shared before, is my most memorable Toy, I suppose. I've shown my grandchildren playing with it. Here is one of my oldest daughter, Annette, in July 1965, playing with it as well. It still works... mostly stays in a box these days... ;-) 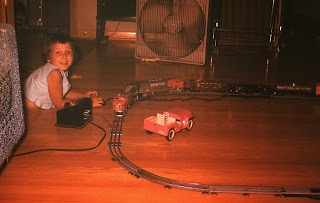 Email ThisBlogThis!Share to TwitterShare to FacebookShare to Pinterest
Labels: Annette, The Book of Me 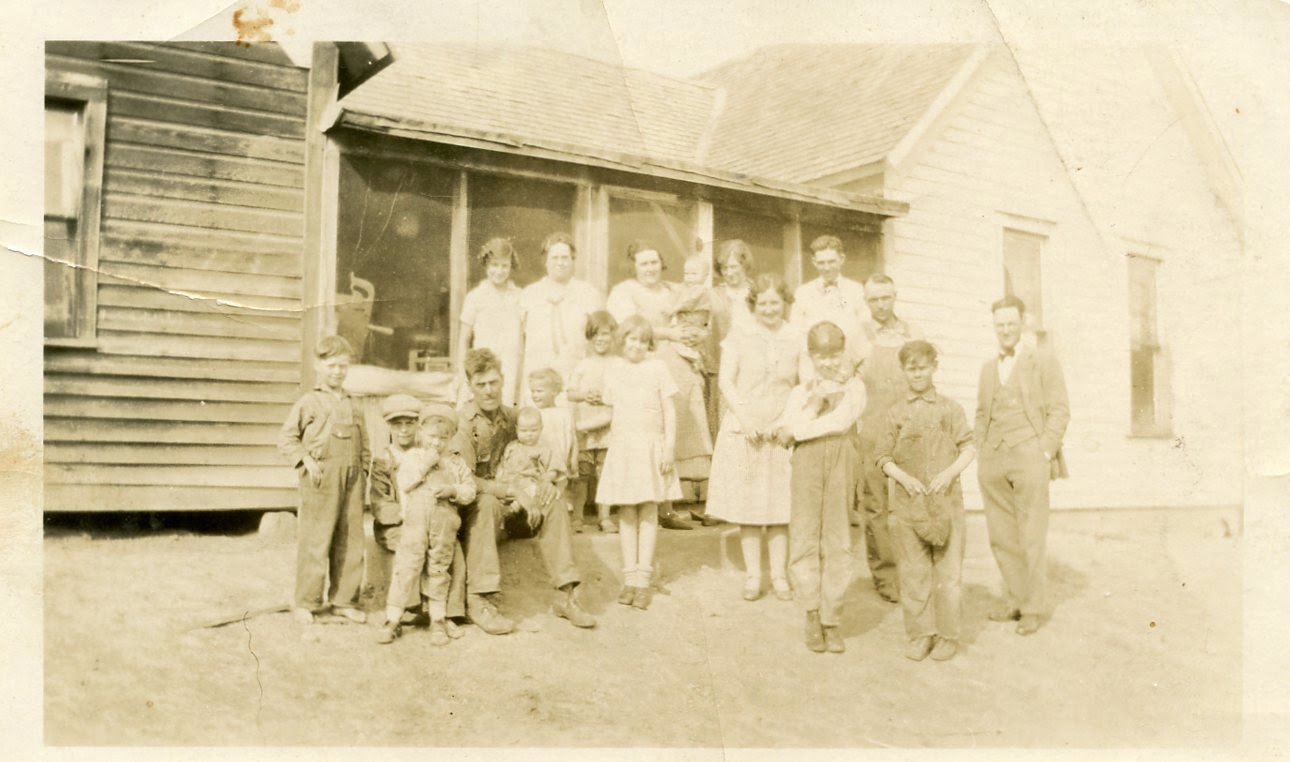 This has been a couple of interesting weeks - far extended family contacts on both sides of my mother's family - that have led to me reviewing some of the old family photos - in addition to having resumed her diary daily entries on December 1.

I'll share the back of the above photo, below, where all the names are mentioned, but, they are listed "backwards" in my view - behind the spot on the image, not in order as you look at it. So, I'll attempt to identify folks, right here. This was a family gathering at Wilson Herron's farm home, on March 25th, 1928. His wife, of course, was Lucile Kinnick - sister of Paul Kinnick, my maternal grandfather. Paul is third from the left, behind the two young men: Leo Kinnick on left and Wilbur Herron on right. Delbert Ford is on the far right. He is husband of Lillian Kinnick Ford, of course. She was most likely the one taking the photo!

Wilson is sitting on the step, left, surrounded by children, a not uncommon experience. Donald H., Duane and Wilson Jr. (Ping) are two his left, in the photo. He holds one of the young twin girls - Geneva or Genevieve. Mother, Lucile, is holding the other one, in the back row. Also beside Wilson is daughter, Naomi. Next to Naomi is her sister, Pauline. Beside her, in the middle, is my mother, Eileen Kinnick - she would have been nine and a half years old. Brother, Buzzy, was still five months in the future to be born!

In the back row, from the left, are Margaret Herron, Nettie Kinnick, Lucile, Dorothy (Sorensen) Kinnick, and Everett Brideson. Everett's wife, Gertrude (Kinnick) Brideson is in front of him, just behind Leo. I think that is everyone. Here is the back of the photo... written in my mother's handwriting... although is looks just like her Dad's - so there is always a glimmer of doubt! ;-) 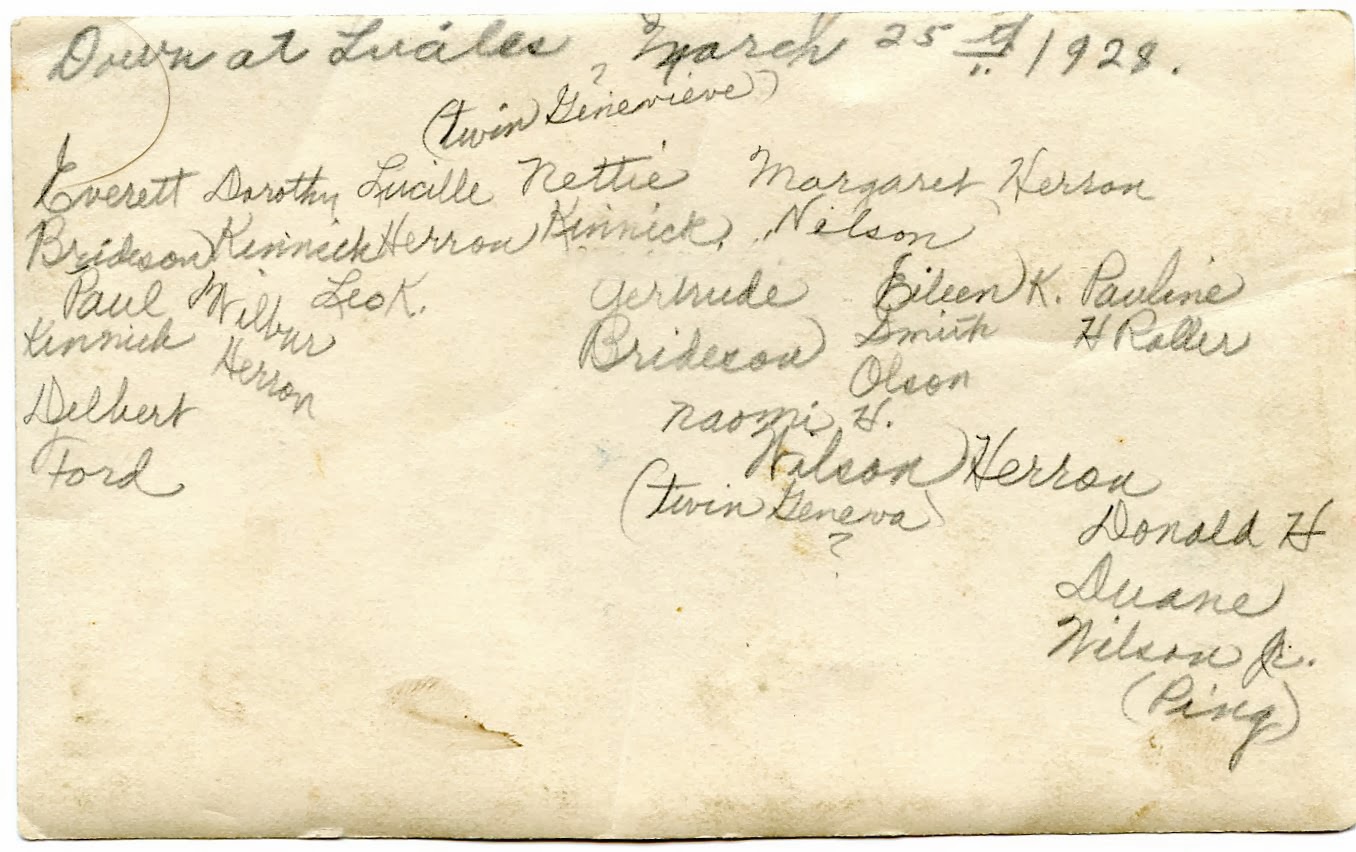 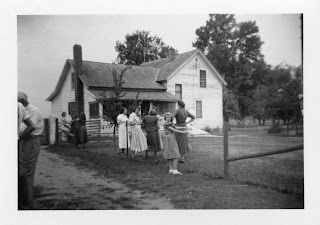 This is not going to be "nearly Wordless" - for sure. This image is very special to me, and I want to explain how I found it and then share some more about it. My daughter had a new "cousin contact" with a grand-daughter of the sister of my grandmother, Dorothy (Sorensen) Kinnick. This encouraged me to pull out the old black and white photos of the Sorensen family gatherings from the 1940s, etc. I had not looked at them in a long time.

In the process of doing that, this image of our farm house, in Iowa, popped up. It is the only image, of many we have of the farm at that time, that is from this particular view, and is especially meaningful to me, for several reasons.

First, it is rare to see this "backyard fence" - more commonly photos are of people up by the house, with the house in the background; or, with the house to the back of the photographer.

Second. See this corner-post, far right. I distinctly remember "riding" that, like a horse, as a kid. Perhaps is was for a very brief time, after Dad put the post in, before he put up the wire. I was much younger, at the time of doing that, then when this photo was taken. Here, which is Fall 1950, I'd have been eleven - much too old to "ride a post!". In fact, Carol, the girl in the center, is the same age as me, within a month or so.

Third, this really shows development of the "house." Far left corner, of the house. Can you see the paint is a different color? That previously was an open front porch. It was removed, and a bathroom was added with a "formal front door and entrance." The bathroom was important in our lives. The "front door" was NEVER used. Everyone came into the kitchen on this side of the house, directly off the driveway, along the left, as you can see.

Finally, the biggest deal is, this "back porch" - see the difference in roof line? - was removed a year or so after this photo and a LARGE family room was built - we still called it the porch - that came about as far away from the house as to where the ladies are standing - with a big fire place on the right end! Quite an wonderful (and final) addition to the old farm house. Neat memories. Wonderful photo.

Let's take a look at a few more photos from that day - they had all been maintained fairly close together under SORENSEN. 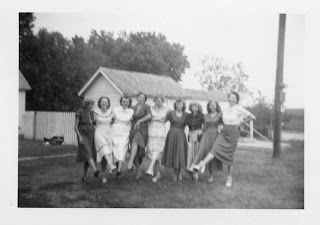 The ladies, doing a dance-kick routine. They were all very musical. But, this seems ridiculous. 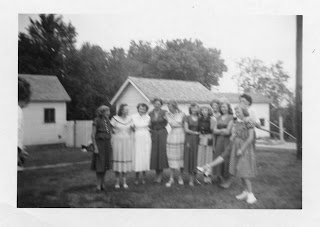 Another. Notice Carol and another lady joining in. Remember, we took very few photos, on a roll, in those days... we saved every one, no matter how bad! Men/Guys standing around talking, out by the cars, in the driveway. How about those cars!! Buzzy, the one on the right, my "favorite" uncle (he and I spent a lot of time together as I was growing up!), owned the Mercury on the left. Alan Jackson wrote a song about "Riding in a Mercury" just like this one - in later years! 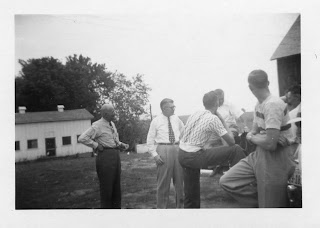 A bit of a close-up of the men - and a great view of the hen house, in the background! 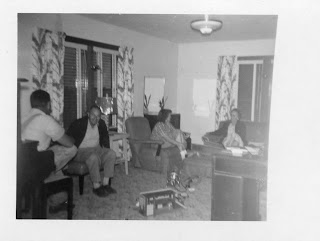 And then, for some reason, a photo of Dad (left) and Mom (center) talking to another couple in the living room - I'm fairly sure they are not family, so, I assume it was just on the roll of film, and kept together!

One more thing. By comparing clothes on different folks, this is actually the same day as the Sorensen Family Group Photo (which I was actually looking for when I found these) from Fall 1950: 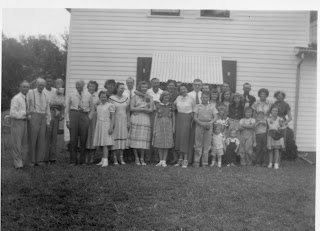 This was taken on the opposite corner of the front of the house. This is our farm, where I grew up. I'm just right of center, front row, just right of the lady in the white blouse. Brother, Tom (now T.K.) is right beside me, little guy, at the time. Brother Jim, in between, is to the right with white shirt.

On my Facebook page, I have shared this and several other group photos of this family going back over the years to 1940, when I was just a year old. Same families - you can watch all the kids grow - and show up, of course. What fun!

I love questions and comments - below, on Facebook, or via e-mail. Thanks! ;-)

The Book of Me, Written By You
Prompt 15: Snow

This week’s prompt is Snow
•    Do you live in area where you routinely have snow?

This Prompt turns out to be comical due to timing. Yesterday, we got 8-10 inches of snow. Very unusual, but very timely for the prompt. Historically, this are gets 4 inches in all of December… 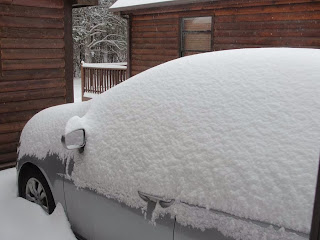 I grew up in Iowa… very common for much snow through the winter. We moved to Tucson, Arizona, in 1983, and then, it snowed there. So we are very accustomed to snow… even though we try to avoid it. 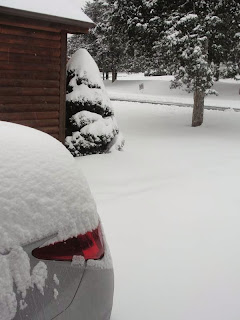 Email ThisBlogThis!Share to TwitterShare to FacebookShare to Pinterest
Labels: Snow, The Book of Me
Newer Posts Older Posts Home
Subscribe to: Posts (Atom)