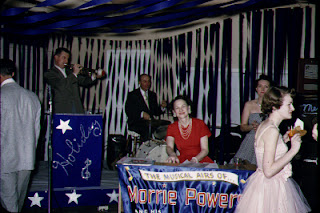 During the 1950s in Coon Rapids, Iowa, and surrounding communities the Morrie Powers band was very popular. Morrie, the local Chevrolet dealer, was on the drums. Ruie Nelson, was on piano/keyboard (did they call it that, yet, back then) - she gave private music lessons in the commuity, as well. I don't know the trumpeter... were there others in the band? This apparently was a Holiday Dance at the High School... 1956-1958 time period. I'd love to get comments. I just ran across this and couldn't stop looking at it - smiling, and remembering!  (Ruie was one my Mom's best friends - Mom also played piano and gave music lessons.) (My Dad was regular customer of Morrie Powers Chevrolet - never drove anything but Chevy in the middle part of the twentieth century!) 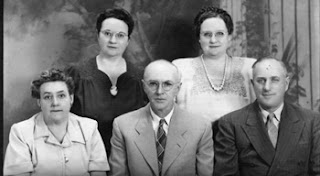 These five are children of Alonzo and Nettie (Williams) Kinnick, as noted last week.

Note: Thanks to 'cousin sharing' on Facebook for the date of the photo!!  ;-)

Now, after additional research, the story becomes more clear, though not totally, of course. First:

New Facts: In searching the newspaper archives, I have also found that Brideson's actually left for California in December on 1948, nearly 12 months later... I think I've recognized a new Treasure Chest source of information for this weekly feature - articles from the hometown paper, perhaps with photos to match... For now, I'll leave it here.

Request: When descendants of Everett and Gertrude Brideson read this, I request they share with me/us the stories they remember of the move to California. Perhaps, share with me via email, and I'll add to these posts... or, simply write in the comments... which ever works best. THANKS! 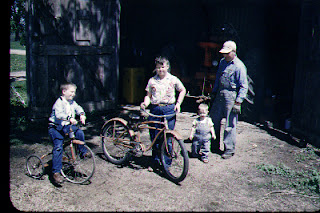 This is scan of another color slide from late summer 1954, with my Dad, Pete Smith, and my younger brothers, from left, Tom, 6+, Jim, 10+, and Barry, 2 1/2, or so. Behind them is the "Farm Shop" with the welder and other tools. You can see that Dad is 'encouraging' them to stay away from the shop itself, while trying be be kind. I was taking the photo, so I'm sure that after taking it, I was expected to 'guide' Barry and boys on Bike and Trike to a safer location and activity!

I would have been between my Freshman and Sophomore year in High School. Ah, the memories!  ;-)

The Smith farm, of course, was in west-central Iowa (corn and hog country), on the west edge of Greene County, nearest town, Coon Rapids. 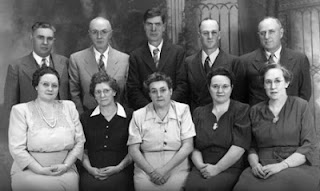 These are the five couples descending from Alonzo and Nettie (Williams) Kinnick - they and their children and their descendants make up the Kinnick-Williams/Williams-Kinnick picnics and reunions over the past 60-70 years or more.

I'm not aware of another photo of these 10 folks together. If you know of one, I'd love to see it. THANKS!

Anyone who knows any more about this photo - I hope you will share. Thanks! 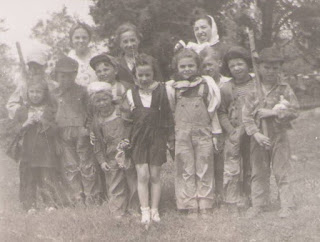 Nothing like an old black and white photo from the 1940s to bring back a myriad of memories!

13 students from the rural Iowa "Willow #3" (Greene County, Iowa, Willow Township) one-room country school... all the students in our farm front yard. Perhaps a fall - Halloween? - 'dress-up' day. Note the wide range of students from K-8th grade - those girls in back are students, not teachers. Billie Smith - me - am the one with the ball cap, middle row, just left of center... NOT carrying a 'gun.' I would estimate 1945 - 6 years old - first grade, if so. Couple of kindergartners in front row.

I have noticed others have used alternative purposed on this daily theme, so I am also - sharing 'affiliated family' information that you might like to follow - I want to write about them, and this seems appropriate.

On his blog, "I Hate Alzheimers," Mike Opperman recently posted: "Dad is a Pioneer" - a nice story about the National Dairy Shrine, a hall of fame for the dairy industry, induction of his Dad as a 'dairy industry Pioneer.' It is a very appropriate award as you can read in the announcement here. [Scroll down a bit, to see the neat story on George!] 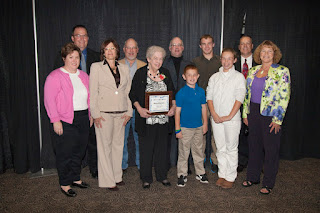 May and George have been important influences in my life. May is the younger sister of my wife Nancy's mother, Ruth (Thomas) Bolger. So, technically, May and George are Aunt and Uncle (by marriage, to me). Both graduated from Iowa State University a few years before I attended. Nancy fondly recalls, as a young girl, riding a train to Beloit, Wisconsin, to stay with them on a short vacation.

They came into my life during my last two years of high school as Nancy and I were 'going steady' and we spent some holidays on their dairy farm in Manning, Iowa, a few miles west of Coon Rapids, our hometown. George spoke to me in very encouraging words about my plan to attend Iowa State. Also, they were just starting their family, as noted in the press release, and we started ours only a few years later. So, though we were a generation apart, our children grew up as contemporaries and are still close friends (as well as cousins) to this day. May and George "seemed like" as much older brother and sister as aunt and uncle. Know what I mean? We and our families scattered across the country, over the years, of course.

So, it was especially nice to their family almost all together again in this nice photo. And, it was especially gratifying to see George get this kind of recognition, even at this stage of his life. I know the family really appreciated even one more recognition of the many things George has done, over the years, for the dairy industry, as well as his family. Neat! ;-)

Treasure Chest Thursday - Why Save PBS?

Many, many reasons for saving PBS! Here are a few! ;-) 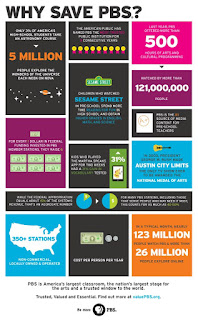 This is a curious 1941 photo I just came across that I had seen in years. My Dad and Mom with me in the middle in full "Sunday Church" outfits, along with me in my coat. It is obviously chilly fall. Mom's dad, grandpat Paul Kinnick on the right, also in coat, vest and tie (and hat) is very interesting.

On the left, is Delbert Ford, holding Dennis, with Roberta. His wife, Lillian, my aunt, and sister to Paul, is obviously taking the photo. Really neat. It is just so distinctive for the period.


From 1954, this was a family gathering 'across' the Michael Smith family. In the back row, Lyman Smith (hat!) with wife, Esther, and daughter Pat and Sharon - our Nebraska cousins! My family is on the left (that's me by Lyman). Dad behind Barry, Mom with Tom, and Lyman has his hand on Jim's shoulder! On the right, is Dad's older brother Willard (Toots!), his wife Mary, and in front, their children Margaret and Dan. On the far right is Judi Hilgenberg, daughter of Dad's sister, Max. 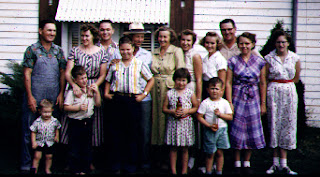 OK, why am I sharing this particular photo, in this way, today? This week, I've heard from another cousin, Laurel Jay Brunken, from the Nebraska branch (2nd cousin, 1(gen) removed) - pretty close, huh? He shared a few interesting photos!

Here are Lyman and Arnold! 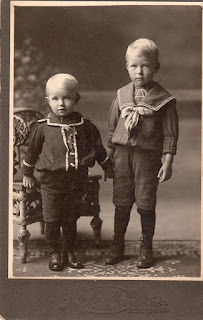 
Laurel also just sent some more recent photos of Lyman's family. Here are Lyman's four children, Shirley, Dick, Sharon and Pat. Pat and Sharon were shown in 1954, above. Sharon is closest to my age; second cousins.

Sharon and his husband, Don Waters, celebrated their 50th Wedding Anniversary in June 2007: 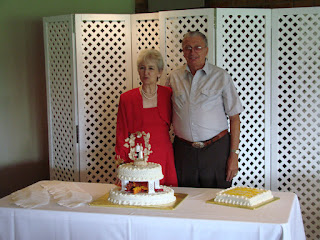 A special thanks for Laurel for much family information/updates, and just great family conversation... continuing! ;-)


Thanks to our Fletcher cousins for sharing this excellent turn-of-the-century family photo. 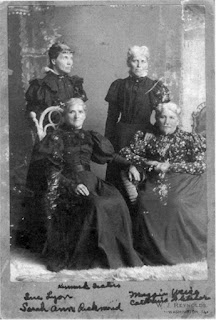 Families are Forever!  ;-)
Note: Simultaneous posting here and at The Kinnick Project
Posted by Dr. Bill (William L.) Smith at 3:00 AM 1 comment: 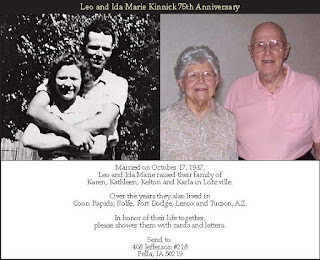 Daughter, Kathy (Kathleen), just sent out the above, on Oct 2 (earlier, today, as I write this)
I had the following two photos picked out to share, earlier, from 25 years ago, on their 50th!
Here they are, in Tucson, from left, Kathy, Karen, Ida Marie, Leo, Karla and Kelton. Neat! 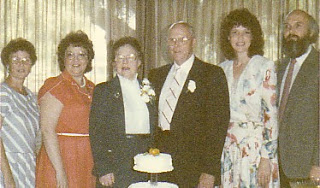 Here is our daughter, Allison, the same day, playing with Karla's two daughter, Kari and Andrea (the three of them all now live in the Chicago area). Leo and Ida are in Pella, near Kathy. 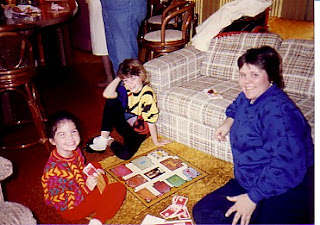 Families are forever!  ;-)
Note: Simultaneous posting here and at The Kinnick Project
Posted by Dr. Bill (William L.) Smith at 3:00 AM No comments: