I have posted over 1100 stories here on this blog since 2009, never knowing who may be reading them nor who may reply in what way. This week, I received a note I never expected to get, with followup. For me, it is quite a story. It relates to this photo, posted at the end of a 2012 post… 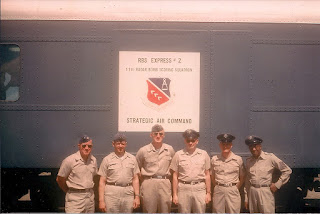 
Here was the first email (each published here with permission from Cory):

I think you knew my father.  Dick Etchberger out of 11th RBS Squadron.  That's him to your left and I'm pretty sure Stan Sliz to your right.  Sure would like to talk to you about your experiences on the train and what you might know about my father.

I was naturally curious, of course, and this is the reply I received, including the several fantastic links at the end.

Bill-  Sit down, hang on, gonna take you on a ride.

I too am a retired college professor (Biology): Penn State, Kansas, Missouri, Switzerland and most recently here in Pennsylvania.

Back to dad:  that picture was taken when he was a SMSgt which he made about 1963, so that pic is about that time period.  RBS Express, probably in North Dakota.  That SMSgt to your left is the Air Force's most recent Medal of Honor Recipient.  Yup my dad.

He volunteered with other AF personnel to run a Top Secret radar site in Laos in 1967.  We were not supposed to be in Laos then, so the AF discharged these guys and were hired by Lockeed Aircraft Services and the CIA to run the site.

The radar site got overrun by North Vietnamese Special Forces on March 11, 1968 and dad saved three of his men while fighting off the enemy all night long.  He was put in for the Medal of Honor in 1968, but because he was "civilian" and we were not supposed to be in Laos, they posthumously awarded him the AF Cross (to my mother) with the understanding that when the War was over and the mission declassified, his medal would be upgraded to the Medal of Honor - that took 42 years.  There is of course, more to the story, but I was just 9 years old when he died, the whole thing was so secret, none of his three sons knew what really happened for another 30 years, and am always looking for people who may have knew him and simply stumbled across that pic on line.

I'm happy to answer any questions.

WELL, needless to say, I’ve now begun to read the book, "At All Costs," that documents the whole story, and had additional communications with Cory. The reading and this discussion has ‘brought back’ many memories of the ‘pre-Vietnam’ period of my military service that I believe have been a bit suppressed in my mind/memory. Each memory retrieved adds new memories resurfacing. I was discharged two weeks before the Gulf of Tonkin Resolution. the ‘official’ start of the war. I cannot help but think I do have some suppressed guilt feelings of my life going on (in my civilian career), when most all of the men I served with did one or more tours of duty in the war zone. This new information really tops that off.  What a hero “Etch” was… and I had actually worked side by side with him, earlier. Never underestimate the potential in those around you!

My point of this post, of course, is that there are unknown benefits every time you post a bit of your family history or genealogy research. It can have great impact, even though possibly years in the future.