My Mom (1918-1999), Eileen, was an intrepid clipper and saver of clippings. Clippings of items of interest to her were everywhere, from newspapers, magazines, newsletter, even advertisements - whatever printed materials that came into her hands was subject to scrutiny and underlining/clipping, if it caught her eye. They also showed up anywhere in the house. She had no filing system whatsoever - not recognizable, at least. As we were going through her
things, ten years ago, my brothers and I would find a letter from the 1930s, a recipe, an advertisement, a sheet of music, a clipping, a letter dated 1999, a christmas card from the
1950s, another clipping, a weekly church bulletin from the 1970s and an undated shopping list, all in one small handful of papers from any drawer or folder in her house... sometimes even an envelope with money in it - she taught music lessons. Obviously, we did not dare to just pitch anything without going through it. After we had actually pitched the "junk" - we still had several boxes of "goodies" - depending on the judge. As the oldest, I received the boxes with the oldest stuff. Too much description, but you get the idea of the challenge I have faced in deciding what to do with what I had.

Today, and from time to time in the future, I will be sharing with you some of these clippings and relate them to you in the context of her self-described life as first, "a banker's daughter" and then "a farmer's wife" - in rural Iowa, from the 1930s to the 1970s (Dad, the farmer, died in 1977). See her 1936 diary annotated at: http://homepages.rootsweb.ancestry.com/~earlyyrs/eileen/1936web/ 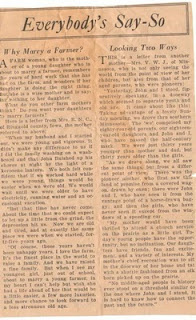 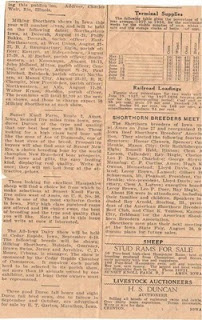 This clipping is apparently from approximately July 1937 based on the info on the flip side... Pete and Eileen, my parents... were married on St. Patrick's Day, 17 Mar 1938... this was part of her "reading material" as they were deciding to get married... she was not yet 19 years old.

The text of "Why Marry a Farmer?":
A farm woman, who is the mother of a young daughter who is about to marry a farmer, remembers the years of hard work that she has had on the farm, and wonders if her daughter is doing the right thing. But she is a wise mother and is saying nothing to her daughter.
What do you other farm mothers think?
Here is a letter from Mrs. R.N.C., of Ringgold county, Iowa, the mother referred to above:
"When my husband and I started out, we were young and vigorous. It didn't make any difference to us if I did the family washing on a washboard and that John finished up his chores at night by the light of a kerosene lantern. We both felt confident that if we worked hard while we were young, things would be easier when we were old. We would wait until we were older to have electricity, running water and an occasional vacation.
"But that time has never come. About the time that we could expect to let up a little from the grind, the depression hit us. Now we are old and tired, and at exactly the same place we were when we started, forty-five years ago.
"Of course, these years haven't been unhappy years. I love the farm. It's the finest place in the world to raise a family. And we have raised a fine family. But when I see my youngest girl, just out of school, about to marry a young farmer, in my heart I can't help but wish she had a life ahead of her that would be a little easier, a few more luxuries, and more chance to look forward to a less strenuous old age."