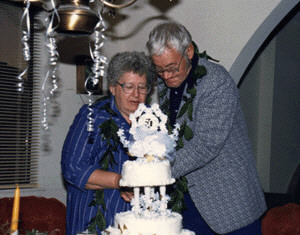 This photo was taken from Max and Orrin's 50th Wedding Anniversary Celebration. I published the Obit for Max and last week my photo with Orrin.

Here is his official obit:

Orrin Hilgenberg, 100, passed away July 14. He was born March 19,1913, in rural Coon Rapids, Iowa, to Albert and Emma (Walthers ) Hilgenberg.
By 12, he was helping his dad with farming, using teams of horses. He continued farming for more than 50 years, graduating to the latest farm machinery. Later he added a second career with Hilgenberg Trucking, running up to four trucks in five states.
Orrin married Maxine Smith Dec. 16,1936, at Trinity Lutheran Church that his grandfather helped build. They were married 75 years before Max passed away in April 2012. They had three children, Gary (1938-2005), Judith, and Mike; seven grandchildren, eight great-grandchildren, and one great great-grandchild.
Orrin's means of transportation again started with his horse, Sparky, then Model T Ford, various cars mostly Fords, including stock cars he raced on local Iowa tracks. He was a member of NASCAR, joining the first year 1948. He had Ford trucks in his business, rode motorcycles and got his pilot's license in 1944 and built Hilgenberg Airport on his farm to house his two-seater airplane. He and Max loved taking short rides with the full moon and take longer trips to Illinois or South Dakota.
In 1980, Orrin and Max moved to Lake Havasu City. At age 75 Orrin started golfing with the men's club at Mt. Olive Lutheran Church. His best year he made a hole-in-one two times. Next he took up bocce ball as a member of the M-W-F group. He loved the game and friends he made playing at Rotary Park.
In his 90s, he took on a new role, helping to care for Maxine. He in turn was grateful to the Havasu Mission of Love at Mt. Olive for the numerous times they helped with outside work. He looked forward to the weekly visits from Mt Olive members/friends.
A memorial service will be at Mt.Olive Lutheran Church July 27 at 2 p.m., with an ice cream reception to follow.
Arrangements are under the care of Lake Havasu Mortuary and Crematory. 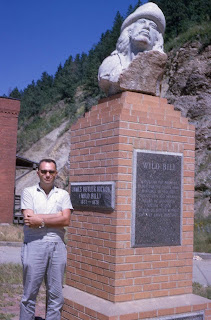 Here I am, in the summer of 1962, visiting this memorial to "Wild Bill" Hickok in South Dakota... a very memorable moment in my life. Have you been there??

I think this is the last time, or next to last time, that I spent time with Orrin. He passed away on 14 Jul 2013, at the age of 100 years and about 5 months. My hat is off to him. He continued to be active nearly until the very end. He and his wife, Max (my Dad's sister), had celebrated their 75th Wedding Anniversary before she passed away about 15 months ago.

Notice, above, left, he is telling an animated story. That was Orrin. Full of life. They lived across the road from our farm, for a number of years, in Iowa, when I was growing up there, before they moved to Arizona. He was a Flying Farmer, with his own plane (for a time) and rode motorcycles.

For these many years, now, this is the image that came to my mind when I thought of him... and it always will be.

The mission this week:

1) What day of the week was your Father born? How you found out


2) What has happened in recorded history on your Father's birth date (day and month)?
How you found out, and list five events.


3) What famous people have been born on your Father's birth date?
How you found out, and list five of them. 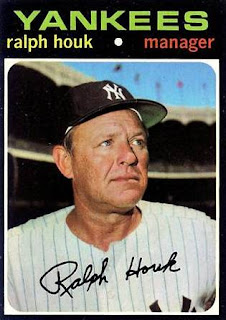 Posted here and link placed in comments at Randy's blog. 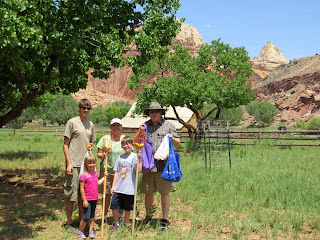 Today I am sharing a photo of 'current events' with my grandchildren with a really fun picture of apricot picking in the orchard at Capital Reef National Park, in Utah. The photo was taken by our oldest daughter, Annette (not in the photo). She and Larry, far right, above, of course, live just a few miles to the west, where we visited last month. Our grandchildren, Kaylee and Alex, are in front, with their fruit pickers in hand. Their mother, our youngest daughter, Arrion, is behind them. On the left, is Larry's youngest son, Ben (Benjamin), our step-grandson. Arrion's husband, Ben, had left on a short business trip to Oregon. He will rejoin the family in a few days, flying in and out of Salt Lake City, about 3 and 1/2 hours away. The apricots they picked looked really yummy!  ;-) 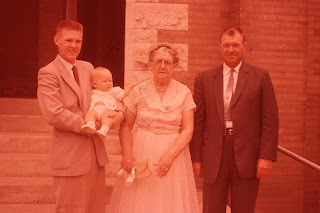 This came from my recent slide scanning campaign. This is from Spring 1958. It is from the family of my wife, her older brother, Bob (Robert), is at the left, holding his son, also Robert (he was Bobby, growing up, but now usually just Bob, as well - lives in Austin). Grandmother, Hazel and Father, Glenn, complete the photo. Love 4 generation photos - as I've said many times! ;-) Glidden, Iowa.
Posted by Dr. Bill (William L.) Smith at 9:27 PM No comments: