Thanks to Susan Peterson for bringing to my attention a blog post by Bill West that I had missed. It is his review of the "Who Do You Think You Are?" - Rosie O'Donnell episode.

I would like to think the analysis in this review, and some of the comments it received, might encourage a few folks that did not see this episode, for what ever reason, to go back and enjoy it.

I felt it was the best overall production, so far. Whether or not you like Rosie is irrelevant. Her story is interesting and the research presentation was especially good, as Bill and his commenters nicely document. It was more indepth, and more complete as a genealogy presentation than some of the others. You can view the episode online here. I hope you will.

Follow Friday - 18 Feb 2011
Have you seen "Welcome to Pine Point?"
My oldest daughter, Annette, and I have regular discussions about how to present materials we find of interest to our various audiences, whether family history (real or fictional), quirky stories, transmedia projects, or - one of her best - Flat Stanley adventures for children. We have talked about telling the story of a town we come across in our historical readings, perhaps where an ancestor lived.

I just heard about the 'Pine Point Project' - check it out, and see what you think? Does it remind you of any of your family history research? How do you think 'the Goggles' did on this project? I found it fascinating... especially when I see they started to make it a book, and instead it became something else!  ;-)

Thanks to Dan Curtis for bringing Pine Point to my attention.

I'm sure some of you already follow Dan Curtis - Professional Personal Historian - I have mentioned his posts a number of times. He is both a professional and a personal historian so some of you may say: "Why should I be interested in what he posts?" and you may be right, for you.

However, some of us are also folks that have been doing our own family history and genealogy work for a time, perhaps keep up a blog, and/or enjoy writing about what we do. Among that group, from time-to-time, there are a few of us who think about doing some work for pay, but don't know how to get started.

Dan's latest post, "Worried About Paying the Bills Between Major Project?" has a list of small projects that you may think about using to help you get started. Even just doing one of these for a friend or acquaintance, even a relative, might get you some word-of-mouth buzz or publicity that could get you going in a new direction. For what it is worth!  ;-)

Treasure Chest Thursday
William Kinnick
1786 Inventory
I had misplaced this document, but recently found it and transcribed it.
Would love to receive comments and thoughts.

Monday at My Hometown - The Gregorian Interview

At The KINNICK Project blog, yesterday, I posted a transcription of a fine article about Buzz and Colleen KINNICK in a local, home town, publication. Please check it out.

52 Weeks of Personal Genealogy & History - Week 6:
Childhood TV Show
Another one "caught my fancy" - it also is useful as a springboard for Sharing Memories posts, as well.

Thanks to GeneaBloggers and Amy Coffin of the We Tree blog for these prompts.

Week 6: Radio and Television. What was your favorite radio or television show from your childhood? What was the program about and who was in it?


Captain Video and Tom Corbett, Space Cadet - the easy, quick answer!
I immediately thought of early television, even though my early childhood was pre-tv; and I did listen to the radio. Green Hornet, etc. on radio... but television put that in the far background.

I have a big scrapbook I made on space travel from about 1950 - that was my big thing (oh, and few pages of photos from the newspaper of Queen Elizabeth's coronation!).

'Captain Video' aired on the DuMont Television Network between June 27, 1949 and April 1, 1955. Al Hodge took over the Captain Video role in 1950 and he was 'my hero.' I also really liked The Video Ranger," his sidekick, played by Don Hastings. More on Don Hastings in a bit. DuMont used kinescope and only a small handful of the episodes survive.

Here is a screen shot of the set - very early, I think. This is a photo of Al Hodge, as Captain Video, in costume (my hero!): 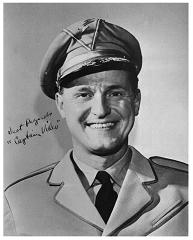 I regularly watched Tom Corbett, Space Cadet, (also see) at the same time - as I recall, it came on in the falling time slot, late afternoon (perhaps 5-6 p.m., approx) - but I was not nearly as loyal as I was to Captain Video.

I was a fan of Roy Rogers, Gene Autry and Hopalong Cassidy, too, but nothing like Captain Video. As an adult, a parent of three daughters, when CB radios were 'in' in the early 1980s, my 'handle' over the radio was always 'Captain Video!' Used it all the way from Iowa to Arizona when we caravanned three cars to our new home in Tucson, in fact. Talk about memories.


Don Hastings, handsome devil, was not only The Video Ranger (had no other name!), but a few years later, he took on the role of Dr. Bob Hughes, on the soap opera, 'As the World Turns.' He continued to play the role from 1960 into 2010 (he stands third all time in playing the same role for the longest time on television).
Here is handsome Don, I just feel good, seeing his photo!  ;-) 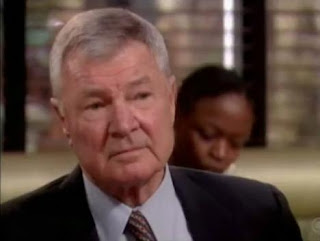 P.S. You might also recognize his brother, Bob Hastings, a familiar character actor in all media over the last 60 years, as well.

Ah, the memories. Thanks again, Amy and Thomas!

Follow Friday - 4 Feb 2011
I was going to stay out of the 'Expert Connect' discussion, but I am going to recommend the broader discussion that Thomas presented at High-Definition Genealogy: Family History is Focus with his "What's  Ancestry.com's Next Move" - and the many comments that it engendered. If you haven't yet had a chance to read it, please do now.

My personal concern is Rootsweb; I've been a avid user for a full 15 years and moved some of my Geocities postings there. Specifically, I have a 2003 dated 900+ webpages family history book update there. If it should go the Geocities route, as Thomas mentions (and I have been keeping my fingers crossed for a few years) I would be in a world of hurt!