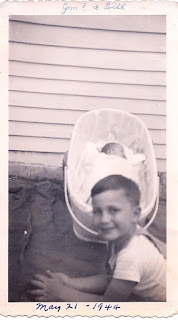 This photo, along with the one posted earlier, were each taken on May 21

Nice day but had rain last nite. Late getting up. Did dishes, sep, milker. Folks came at 2:00. Pete & Billy to Marg’s & got her camera. Fed baby & we ate at 3:00. Took Jimmy’s picture. Did dishes, straighten the house. Cleaned up. Took drive in folks’ car to see Willow. Fed Jimmy. Popped corn. Louise’s came. Ate did dishes, visited till 10:00. All of them here except Howard.

Besides being first photos of Jimmy, the rain and drive are significant.
Had rained on several recent days, so Willow Creek, a mile north, would have been out of its banks, creating a small lake - between our farm house and the school where I would go in the fall. Happened a couple of times every spring. It was a popular thing to do, to drive up over the hill in the middle of the mile and stare to the north at the flooded water. Perhaps why I’ve always had a fear of bodies of water…

Water normally went back down in a few days, leaving a mess on the roads, ditches, fence lines and crops in nearby fields. Great memories! ;-)

Oh, one other thing...  Notice that the morning cleaning ritual now included a 'milker' - Dad had purchased a milking machine for the cows. The barn was apparently already equipped to handle them, so one day a couple of weeks ago, it was noted he had gone to Atlantic to get the machine. What was being washed was the tank that the milk was put in from the cow, ... poured into the five gallon cans, for transport to market. I clearly remember the milking machines. I got to be the washer of the machines, a little later on. ;-) Surge milker, that was the brand name... something like this... 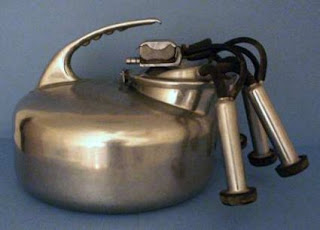 Email ThisBlogThis!Share to TwitterShare to FacebookShare to Pinterest
Labels: 1944, From Mom's Diary, Jim