From Wikipedia: The 1943 World Series matched the defending champion St. Louis Cardinals against the New York Yankees, in a rematch the 1942 Series. The Yankees won the Series in five games for their tenth championship in 21 seasons. It was Yankees manager Joe McCarthy’s final Series win.

Because of World War II, both team’s rosters were depleted: Johnny Beazley, Jimmy Brown, Creepy Crespi, Terry Moore and Enos Slaughter were no longer on the Cardinal’s roster. Joe DiMaggio, Phil Rizzuto, Red Ruffing and Buddy Hassett were missing from the Yankees, and Red Rolfe had retired to coach at Dartmouth College. 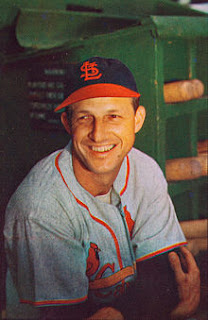 Photo of Stan Musial ten years later… best I could do… ;-)
He was listed as playing… Mutual Radio broadcast with Red Barber and Bob Elson.

… Folks came out for dinner. Ate, did dishes, listened to Series. …

Warm & windy. Got up late. Did sep. Went with Pete & dug onions. Got dinner.  Ate, did dishes. Pete went to Scranton to get Lety. Billy & I listened to Yankees win Series & took a nap. Sewed on apron. Chores, made waffles, wrote in books.

I got being a Yankee fan from a very young age. We liked winners. What more can I say! ;-)

Email ThisBlogThis!Share to TwitterShare to FacebookShare to Pinterest
Labels: 1943, Billy, From Mom's Diary