Treasure Chest Thursday - old diaries and more
I first became aware of Babe Towne, of Coon Rapids, Iowa (my hometown), about five years ago. I'll be telling this story in several parts, so bear with me, please.

Our family was actively involved on EBay, both buying and selling. My oldest daughter, Annette, and her husband, Larry, had bought a diary written by a young lady from near his hometown, in Sullivan, Illinois. They had used it to write a report on the research use of primary sources on their escrapbooking website.

About this time, I came upon, and bought, a tiny diary of a person from my hometown, Coon Rapids, Iowa. Her name was Jennie Ellis. I did not recognize her name, just the place. Along with the diary were a series of tiny photos, one marked "Jennie's beaux" & "Jay T" along with Coon Rapids, Iowa. Here is that part of the photo: 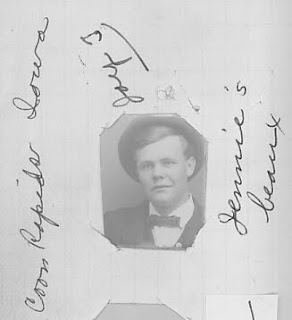 Based on info in the diary, I identified him as Jay King "Babe" Towne, a young man of some renown in the area as a baseball player.

Life got in the way - I hadn't done any more with the diary, put it away "somewhere" - retired - then;  see My Hometown on Monday, earlier this week! - I published that bit on Monday, and recalled having seen "Babe Towne" before!! It set my genealogy juices flowing, again....

Among other finds, on the Internet of today, with NewspaperArchives at GenealogyBank.com, for one very critical source, I came across this news article, among a number of others: 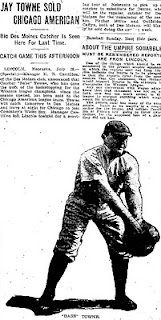 He played for the 1906 Chicago White Sox - who beat the Chicago Cubs in the World Series that year - a whole story in itself! 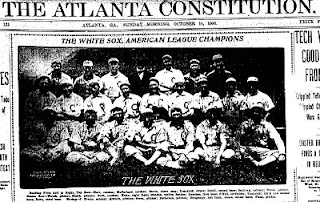