Surname Saturday - CONANT
Through the first 26 weeks of Surname Saturday posts, we named and discussed the surnames of my "round of thirty-two" (scroll down a bit) - back through 3rd great grandparents.

Now we are in the fifth week of sharing some of the "further back" surnames with which I have spent some time and done some research - some, like today, again, quite a bit, actually.

Today, we will look briefly at CONANT. This is going back on my father's mother's line, PRESTON. Her father was James and her grandfather was William, The Old Sheriff. The father of William, the old sheriff was also William PRESTON (1755-1842) (and his wife, Elizabeth Cynthia LORD). His mother was Hannah HEALEY (1734-1812) who married William PRETON (1728-1804). This William was born in Beverly, MA, and died in Strafford, Orange Co, VT, and was the first son of William PRESSON (1704/5-and Mary RAYMOND (b. 1709/10, Beverly, MA-?)

Mary RAYMOND was the daughter of Nathaniel and Rebecca (CONANT) RAYMOND. Rebecca CONANT (b. 31 Jan 1670) was the daughter of Lot (1624-1674) CONANT and Elizabeth (WALTON) CONANT. Lot CONANT was the son of Gov. Roger CONANT (1592-1679), The Founder of Salem, MA, and Governor of the Massachusetts Bay Colony for a short time. A cloaked bronze statue of Roger CONANT faces the Salem Common and stands atop a huge boulder. 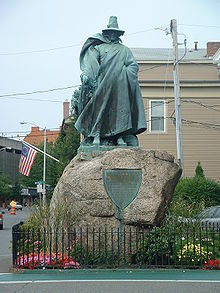