The primary memory of our first six months in Schenectady, as I was struggling to learn this new, high level, Traveling Auditor game, was on the home front. Nancy was pregnant with our third child, due in 1968 (first one, 1960; second, 1964). Unfortunately, she was a Rh Factor baby. She decided to come early, on December 23, 1967. However, her little heart was not up to the strain her 'conflicted' body put on her. All the remedies easily available today had not yet been developed by medical science at that time.

We buried her in Schenectady, where she was born. However, a few years later, when it was apparent we would never live there, again, we brought her little casket back to Iowa, with the metal marker, to the Union Township cemetery near Coon Rapids, near where my Dad was buried. When Mom died, in 1999, we decided to buy our own gravestone, for future use, near theirs, and mounted the metal marker on the back of our stone (rather than have the grass grow over it). 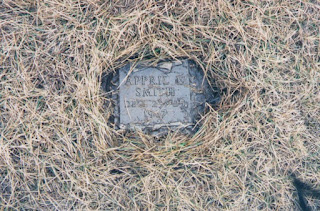