Plaster of Paris car molds
Dad has been gone since 1977, Mom since 1999, I thought I took all "my stuff" when I got married, over 50 years ago. Yet, from time to time, one of my brothers (four younger ones - spread over 16 years) will hand me a box or envelope or sack and say: "I think this may be yours!"

Plaster of Paris car molds. Such is the case with these two rubber molds from the late 1940s or early 1950s (I was going to say "old" - but that goes without saying!). 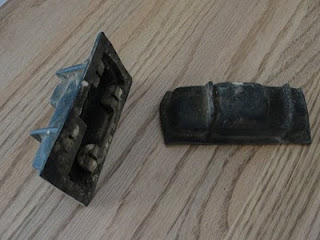 One is a pickup, and one is a sedan - Fords, as I recall. Dad always drove Chevys, but my toys that I made were Fords... that was ok!  I made a few... but, you needed to have the "axel" - a special thick little wire with knobs on each end, that fit in the mold, and, of course, the little rubber wheels that fit on the axels, after you extracted the plaster of paris car/truck out of the mold, with the "axel" imbedded in the plaster. I know I still have a little car somewhere, in a box. Had a "pickup" for a long time... but think it "got left somewhere!"

Perhaps it will show up in a sack, one day, as well.  ;-)
It was a craft. Didn't know that name for many years, but it was a neat one! I built a lot of block farms, cities and towns around those cars/trucks!  ;-)
Families are Forever!  ;-)