He married Irene HARGROVE and they had two children. At his death, he had six grandchildren and five great-grandchildren. 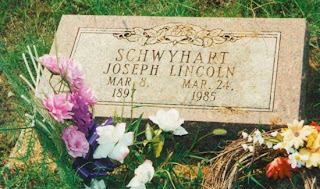