Today I present the first of a number of posts for this Civil War series of my ancestors in the U.S. Census data where some of the young men later served in the Civil War. The Lowery family is a great one to start, because they had at least three young men serve in the Union army. Actually, two of the three have been featured in prior Tombstone Tuesday postings, with their gravestones showing they led long lives after their service. The 1850 U. S. Census image is from ancestry.com, and the following is copied from their transcriptions: 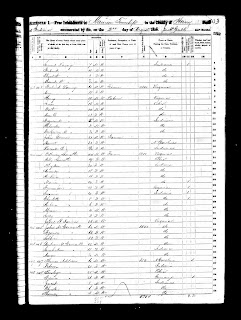