My Hometown on Monday - 1952 Club Presidents 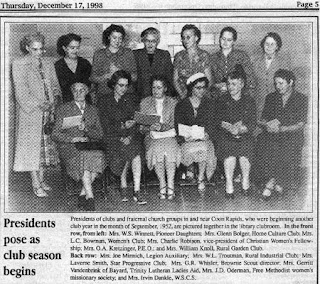 [Personal Note: Mrs. Leverne Smith is my mother; Mrs. Glenn Bolger became my mother-in-law; the rest were friends and neighbors, of course. I was just finishing seventh grade in one-room country school, this spring - to "town - consolidated" school for eighth grade in the fall!]

Some additional caption, in 2010, reads:

"This is surely a telling photo of how the social fabric of life was like in Coon Rapids almost 60 years ago. This photo shows the Presidents of clubs and fraternal church groups in and near Coon Rapids who were beginning another club year in March 1952. By today's standard, this number of women's groups would be amazing for a community the size of Coon Rapids. Back then, most of these women did not work outside the home so they relished the opportunity to socialize at these clubs and fraternal groups. No doubt, some of these women were members of several groups and fraternal organizations." They also added: "There were even more club representatives who could not make the photo. They included Mrs. Orrin Oliver, Faith chapter O.E.S.; Mrs. Wayne Cooney, Rebekahs; Mrs. Jack Bowman, Star W.S.C.S. and Mrs. Pete Vonnehme, Catholic Ladies Aid."