Frederick and Ann had seven children, four sons and three daughters. Three of the four sons served in the Civil War. One of them was Philander Lowery (1847-1914)... excuse me, but I love that name. Below, I am noting the information on his tombstone in the Sugar Grove Methodist Cemetery, Henry Twp, Henry Co, Indiana. Philander had three marriages and 8 children that we have identified. Philander was my first cousin 4 times removed! 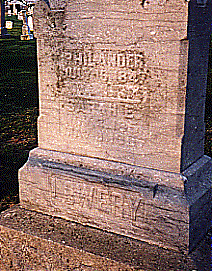