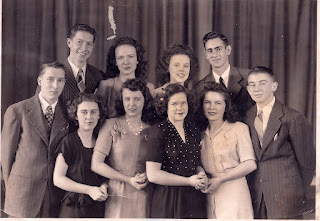 
One of several graduation related activities for Buzz and his class:

So much to say, so little space. Buzz and Colleen had just started really going together. He was star on Boy’s BB team, too… but they weren’t that good. Colleen star on Championship team, of course. Each so tall and good looking (photo of them together, to come, later on). Made quite a couple. Noted that Buzz had Mom & Dad’s car a lot, lately, leaving them with the pickup, when Buzz had dates!! What fun!

Chose the photo of the singers for here. Madrigal actually performed at graduation, I think. Buzz and Bruce were in the quartet with two of the girls from this group.

Personal note: Last summer, at a funeral, it was fun to see both Buzz and Bruce, together again after a number of years, both now in their mid-eighties. Bruce had been living in Arizona for quite a while.