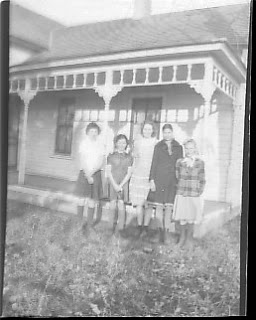 Old front porch before being enclosed for bathroom 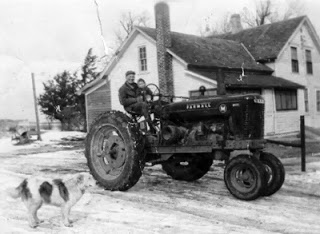 These entries are to record several events of the time - that I’ve wondered when they actually occurred. Before I get to the bathroom… Grandpa and Grandma Kinnick and Buzzy apparently had moved out to the Harvey Place on the Glidden Road in about late August. No big announcement, but one reference to ‘Harvey’s’ and then it was ‘over to Mom’s’ rather ‘in to Mom’s… and other things.

What had been a front porch on the farmhouse, southwest corner, west of the kitchen, became the bathroom, and ‘front entrance hall’ (that we never used) by way of Henry Johnson and his boys at this time. Mister came a few days later to put in the bathtub, toilet, and other plumbing. At the same time, it appears, Dad was finishing the south half of the basement, putting in the cement block walls. Again, I have vague memories of this happening, but nothing to tie it to a date. I’m a bit surprised it was this early, but really enjoying seeing how quickly Dad was improving the farm and house, now that it was theirs. Earlier in the fall, they also had workers in installing ‘insulation’ that must have been very nice. The word ‘remodeling’ was used a time or two, but nothing more specific. It was an ongoing set of tasks, obviously. Outdoors, during this year, there was much reference to tiling. One day: “Billy helped Pete unload tile,” for example. Other references to ‘digging ditches’ and one to ‘the septic tank.’