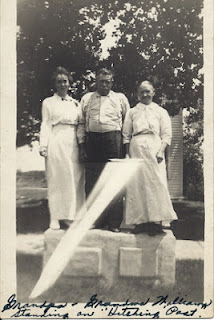 This was the first photo in the third batch of Kinnick-Williams photo scans my cousin Ellen was kind enough to send along to me recently. This is the Williams side. Her comment:

"Josephine Brock, Elias & Sarah Williams - Writing is mostly on front.  Back lists names as: Josephine (Brock), Elias Williams & Sarah Williams.  I'd guess this to be around 1900, in which case Josephine was either already married or at least engaged to William Brock.  I wonder if he took the picture?"

Sarah (1853, Ireland - 1938) was actually the second wife of Elias, of course; the mother of his children, Ann Eliza, had died so young. The children all considered Sarah their mother; the grandchildren considered her grandma. I think this may actually be the first photo I have of her!