My mother, Eileen KINNICK (maiden name), kept a diary from 1932 until her death in 1999. In Feb 2005, I created a website of her 1936 diary, the year she graduated from high school. During the latter half of 2011, commented weekly on these entries.
For 1937, I am transcribing the daily entries, currently, at The KINNICK Project surname blog.

In this weekly blog post, I will make summary comments and observations, and perhaps add a photo, from time to time. Starting here with Week 10, I am switching to the week ending on Friday.
Setting: The family lived in a farmhouse a couple of miles out of town (Coon Rapids, Iowa). Older brother, Leo, lived at home; his girl friend, later wife, Ida, visited regularly. Younger brother, Buzzy (she often wrote Bussy) was 9 years old. Pete Smith is her 'boy friend' - fourth month starting Jan 1 (they do marry, in Mar 1938).


Week 16 (Apr 17-23): Recently, Eileen has been watching and going "bowling." We have wondered what it was. Now we have a Coon Rapids Enterprise article in the 75 Years Ago column that relates to Eileen's diary entries. 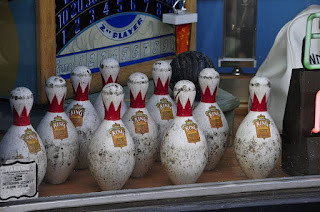 75 Years Ago
April 2, 1937
Geo. Lachenmaier announces the opening of a new bowling recreation parlor in the Boehler building over the Cadden clothing store. The new alleys, installation of which will be completed within the week, will be somewhat different from the old fashioned alleys as they are ten feet shorter and the balls are some four or five pounds lighter. Otherwise the game is very similar to the old game of ten pins. It is a new game, however, called “duck pins” and is taking the country by storm. Mr. Lachenmaier will have four alleys in this new parlor, installation of which is to commence at once and to be completed within the week. He expects the game to prove popular with men and women alike and to be the recreational center of the community. The grand opening is announced for next Friday night at which time Mayor Whittle will officially open the alleys by rolling the first ball, following which two mystery men of the community will be matched in the first game. The first night will be ladies night and all ladies may try the new game without charge. Mr. Lachenmaier says the place will
be one of the cleanest and most respectable in town and the ladies will be welcome at all times. He plans to designate Thursday evenings as ladies’ night when part, if not all, of the four alleys will be reserved for their exclusive use. George, a former Amour Creameries employee, says it is going to be hard to get out of the habit of riding a truck or company car, but says “Come up and see me some time.”

Email ThisBlogThis!Share to TwitterShare to FacebookShare to Pinterest
Labels: 75 yrs ago, Eileen, Kinnick