Tombstone Tuesday - 7 Sep 2010 - Smith Grandparents Post 3
On the 22 Jun 2010 for Tombstone Tuesday I reported on recording my Smith Grandparents on Find A Grave (William - Ellen). Today, I want to share the obituary of Grandfather William as recorded in my Aunt LVene's family history from the local Coon Rapids Enterprise. Next week I will share the obituary, same source, for Grandmother Ellen.

I feel it is worthy of note, again, that he died at age 70 four months after I was born (I'm one of the two grandchildren mentioned, below, along with my cousin, Gary, son of Maxine) and I have now passed my 71st birthday on July 1 of this year. 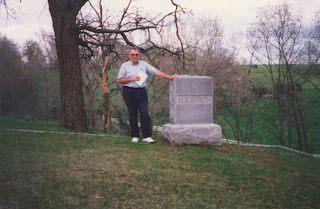 Dr. Bill beside grave marker of W. E. Smith, his grandfather, for whom he was named.
From the Coon Rapids Enterprise (via the LVene Thomas Smith family history book)

Under the direction of the Rev. W.F. Clayburg, pastor of the Methodist Church at Carroll, funeral services for William E. Smith, of the Star community, were conducted at Coder's funeral home at 2 p,m, Wednesday afternoon. Mr. Smith died Sunday at the age of 70.

Out of town relatives attending the funeral were Mrs. Lena Brown, of Scranton, Mr. and Mrs. Grant Ballard of Waterloo, Mr. and Mrs. Frank Barlett of Perry.

When he was a small boy he moved with his parents to Grand Mound, Iowa. At the age of 12 years he moved to Carroll County and made his home in this vicinity until the time of his death.

On May 11, 1904, he was united in marriage to Mrs. Ellen Preston Ballard and to this union were born nine children. Mrs. Smith and two sons preceded him in death.