Treasure Chest Thursday
Smith Grandparents Post 5
Miller Will
Aunt LVene's Smith Family History included a complete photocopy of the Will of John Miller, maternal grandfather of Ellen Preston Ballard Smith, my grandmother. Today, that Will is the Treasure, because it tells so much family history, spoken (written) and unspoken...

John Miller was a prosperous farmer in Williams County, in the NW corner of Ohio. To keep the story, here, short, in 1869, my Grandfather, James P. Preston, "came riding in on his horse out of the West" - as my parents told the story - from his homestead in Montana Territory (and years as a gold miner), and in a few weeks, married the young daughter of John Miller, Ellen Miller. [It could be noted that James' father had been the first Sheriff of the original (larger) Williams County in 1826, in Defiance. James had returned, at least partially, to participate in the court settlement of his father's estate; he had died under mysterious circumstances, and the estate took years to settle.] Further, a cynic could also suggest that James needed a wife, and family, to settle his "Homestead Act" claim on his Montana ranch, which he did shortly after returning from "the states" to Montana Territory with his new wife.

James and Ellen went off to Montana, which did not please her father. There, they had four children over the next ten years, Ellen born in 1880: the three "Preston boys," Ernest, Harry and John, and, my grandmother, Ellen Preston (named after her mother - how clever!). When Ellen became ill, and returned to Ohio to recover (without the children), her father would not let her return to Montana. When she had been gone a year, James filed for divorce. In the meantime, again, making the story short - really - John Miller had let his daughter move to Coon Rapids, Iowa, where her older brother was a local banker and respected citizen. In the divorce settlement, James allowed the children to go live in Iowa with their mother (all grade school age, at the time). They each attended and graduated from High School in Coon Rapids (which, of course, is also my home town!)

In his will, John decided to bypass his daughter, and her husband, by making bequests of land, farms, to each of his four grandchildren, directly, and having them pay a sum monthly ($5) to their mother, through her life... so she would be taken care of, but not have the responsibility of the land.

Here is how it worked. Have you seen this before? I'm a bit curious if any of my cousins have heard the story differently.

On these images, I've clipped it a bit - so I'll comment on what is here. First, this is two pieces laid together, to set up the premise, and you can see that Ernest got the first farm. Each was 160 or 200 acres of prime farm land, in the area near Coon Rapids. 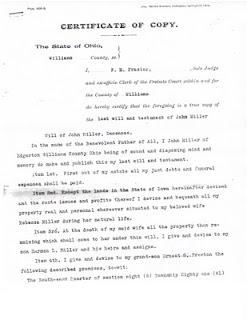 I've skipped the parts describing the rest of Ernest, his brother Harry and pick up at the end of John, just before the details of the bequest to Ellen, the youngest, the granddaughter, 160 acres. This was shared with you as "The Home Place" recently. 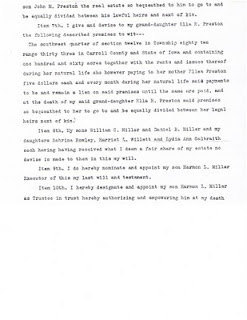 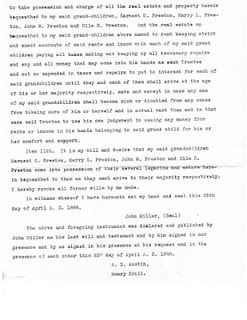 Further note, above, Item 8 and 9. Harmon L. Miller was the banker in Coon Rapids. In Item 10, then, partly above, continued, he is charged with administering the bequests. [This was not a clear and easy job, but I'm confident he was up to it. In the Oklahoma land rush, he came out with many, many oil well properties....] Note that in Item 11, he does allow each of the grandchildren to receive their land when they reach the age of majority. This will was dated 1888, but is was contested and not actually settled until 1909, five years after William and Ellen were married.

It was not until 1909 that they were able to move out from town to live on their farm, where the rest of their children, including my father, were born.