My Hometown on Monday - Hometown by LVene

Hometown by LVene
(with my comments and photos, as well)
This is the first of what will be several excerpts from a nine page "story of the early days" written by my Aunt LVene (Smith Thomas) and included in the back of the Smith Family History book she compiled for her siblings in the late 1980s-early 1990s. These are some of her memories of our hometown, Coon Rapids, on Saturday nights...

"Saturday is not what it used to be in the old hometown. Once it was the busiest day in the week for merchants, because in small rural communities farmers came to town on Saturdays to do their trading. Forty years ago country people did not go into town every day. They came once a week, perhaps more if repairs or some important item was needed. All week eggs were gathered and put in a 30 or 60 dozen egg case. (Remember them? They are collector's items now.) They were made of wood with cardboard fillers inside to hold eggs individually. Cows were milked, the milk separated, the cream poured into 5 or 10 gallon cans to bring to town. Cream and egg money bought the family's groceries, and now and then a little money saved to spend elsewhere. I remember how much fun it was to meet your friends in town on Saturday night and walk around the streets or sometimes to go to the show."

From Dr. Bill: My few actually images, "memories" I suppose, from the mid-to-late 1940s, as a youngster, relate to the Saturday nights in town, much as LVene describes, above. My wife and her family did the same, also, and Nancy often tells of how she spend the "dime" she was given - would it be candy OR a comic book, this week, etc. Never enough for both! My memories are going with Dad, with the Milk and Eggs, to the Creamery. The most vivid memory is, at least in my mind, the image of the men, standing around, each wearing their "town" hat, ready to head up to main street where everyone had their favorite parking places, to hear the gossip, and spread some, I assume.

Here is an example of the "town" hat - Walt Disney was a bit formal, but that is the image. 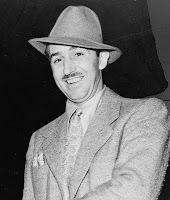 And, here is an example of the "cream can" that LVene mentioned. Dad and a neighbor and his son, with brother Jim (just behind the can), and two dogs, getting ready to take them away. 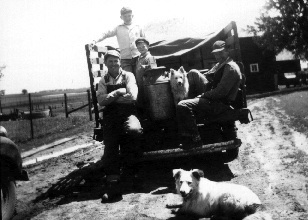