52 Weeks of Personal Genealogy & History - Week 4: House
I've said I don't attempt to do this exercise every week, but for the second week in a row, this one "strikes my fancy" - it also is useful as a springboard for Sharing Memories posts, as well.

Thanks to GeneaBloggers and Amy Coffin of the We Tree blog for these prompts.

Week 4: Home. Describe the house in which you grew up. Was it big or small? What made it unique? Is it still there today?

I'm using the same photos, again, because they show our house, as well as our cars! 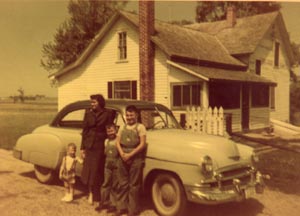 In this first one, you see the house as it was during the 40s, with the old porch on the right. In about 1948, the old porch was replaced with the "New Porch" which was an extensive "family room" - Fireplace and bookcases on the far end, on the right, in the photo below. 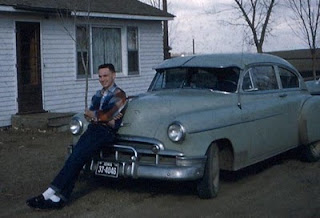 I put "porch" in my query, and came up with two photos I don't think I've used below. The first shows the left side, where the "old porch" used to be. This was a youth group meeting at our house, in the "New Porch" - the kitchen is behind, on the left. I have my slide projector lid, and my eyes closed. Donna was a good family friend (second from left). Nancy - became my wife of 51+ years is seated in the center, and my cousin, Dennis, is in the brown shirt. 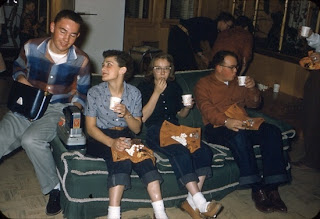 This one is the family standing in front of the fireplace - bookcases on both sides. About 1954-5. Love that Motorola TV, as well! 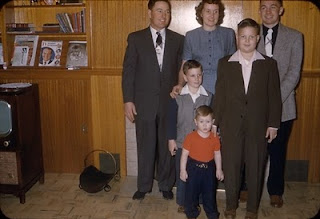 The house, on the farm, has been gone more than a decade. The farm is no longer in the family, either... near Coon Rapids, in Greene Co, Iowa.