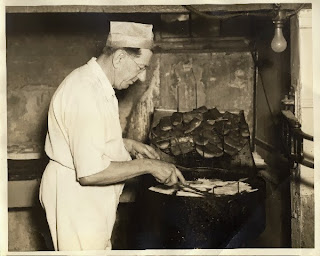 Raymond is my first cousin, twice removed; that is, Joseph Schmitt was his grandfather, and my great-great grandfather. He was a Baker. Love to share photos of people at their work. The photo comes courtesy of the recently expanded research and sharing of the "Nebraska Cousins" I've mentioned earlier. Along with my daughter, Arrion, they/we have formed a new Facebook Group for sharing and 'new cousin' discovery. This photo came from the latter source - contact with Pat Chittendon, in Wisconsin, a granddaughter of Raymond, who shared this photo, and others.

If you would like to join the group, let me know. We have 35 members now, and getting lots of looks.

One further note: I've written several times of my great-grandfather, Michael Smith, a Civil War veteran.
This group emphasizes that his family used several spellings of his last name, including: Schmitt, Schmidt.