The Book of Me, Written By You - Prompt 5: Your Childhood Home

The Book of Me, Written By You
Prompt 5: Your Childhood Home

Your Childhood Home - My parents rented farms the first couple of years of their marriage. I was about 2 or 3 when they bought the farm where I grew up - through High School - until I left for college. My parents and four younger brothers (who were each born while we lived here) continued to live there for many years after I left.

The farm was on 160 acres in Willow Township, Greene County, Iowa, about 7 miles northeast of Coon Rapids, Iowa. We were just a mile east of of the county line with Carroll County, Union Township. Most of our community relationships were there. The aerial photo of the farm was taken in the late 1940s. (Note: the one-room country school I attended through 7th grade was located a mile north of our corner - just to the left of the upper left corner of this photo!) 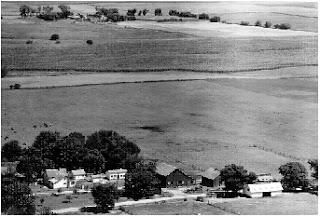 What was it like – describe it – each room. Fairly normal farm house, for the time, actually, with a couple of special features. Kitchen, Dining Room, Living Room, Bed Room on first level… this was my parents bedroom. Upstairs were two normal bedrooms, plus, over the kitchen, we made another bedroom (we called it the attic), that was used when brothers 3, 4, and 5 arrived. I got the first upstairs bedroom; later shared with one brother.

When Mom and Dad first bought the farm, there was a porch on the west (front - left, above), and also on the east (back) of the house. Early on, in the mid-1940s, the front porch was enclosed and made into a full bath room and entrance hall (though that door on the 'front' was NEVER used - everyone entered near the kitchen…on the side of the house). This was the status in the farm photo, above. In about 1949, the old, small porch, on the east, was replaced by THE PORCH. You can see it directly behind the family in the 1954 Easter photo. It was what we later called "a family room." Note: Entering that door, left, below, the kitchen was immediately to the left.


Was there a favorite room? THE PORCH was a special place for each of us. It was a large room. We moved the piano out there; there was always an upright freezer there, in later years, full of goodies. The east end was all mahogany bookcases built in the wall with a flagstone fireplace in the center. A long window seat under the big window. The television (we were one of the first in the neighborhood to have one) was in one corner - a Motorola. And, lots of space for boys to play. Couch and lounge chairs facing the fireplace. Many parties held here, family, friends, school, church, etc.

Is there anything you particularly remember from the house? Everything. All family memories of the time are tied to this house, and the yard around the house. A very special place (of course!).

The road & area - We had a 'main' gravel rod running north and south west of the house. We also had an east to west road on the south side of the house - it ran to a house/farm a half mile east on a dead end. The drive came off the south road, past the house, and to the west. A nice lawn with apple and cherry trees occupied the corner, with walnut trees along the west road. Our farm was actually the 80 acres on the north and 80 acres on the south of that east-west road (this is the road you see along the bottom, in the photo. We later bought the land to the north, that is in the upper part of the photo, as well).

My additional comments: This was a fun exercise, because I always enjoy recalling those days, on the farm, the began my life. Thanks, for the memories!