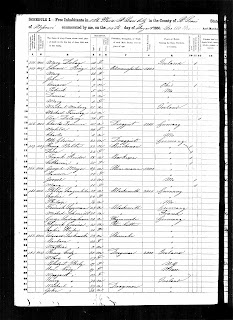 Arrion (my daughter) located an 1850 (dated 14 Aug) U.S. Census record for 5th Ward St. Louis City, St. Louis County, Missouri, with Michael Schmidt, 21, Blacksmith, born in France, in the home of Blacksmith Phillip Langenboker, $2000 Real Estate owned, 28, with his wife, Sophia, 24 (both born Germany), and son, Phillip, born in Missouri. Also in the household in addition to Michael were 3 other 20-something young men (a Blacksmith, a Wagonmaster, a Stone Cutter) from Germany and a 20-year old female, also born in Germany.

Eleven or so years later (5 Sep 1961), Michael enlisted in the Union Army from Davenport, Iowa, as a farrier (blacksmith) and served in that capacity for 3+ years with the 2nd Regiment, Iowa Cavalry.