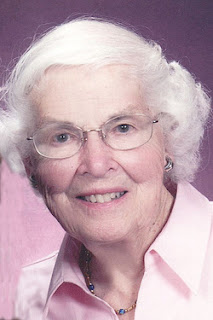 Mary Elizabeth “Betty” Thomas, the daughter of John Raymond Tumbleson and Nellie Cord Tumbleson, was born April 14, 1917, at her grandparent’s home in Danbury, Iowa. As Betty’s father was a Methodist minister, the family moved frequently. The family lived in Sac City, LeMars, and Clear Lake while she was growing up. Betty graduated from LeMars High School in 1935. Following graduation, she earned a Bachelor’s Degree in Home Economics from Iowa State University.

Following graduation from Iowa State University, she moved to Coon Rapids in 1940 to teach Home Economics. While teaching in Coon Rapids, she met Wesley Thomas. They were united in marriage by Betty’s father on October 27, 1945, in Sherman Oaks, California. Two sons were born to this union. Following Wes’s service in the Navy, they returned to Coon Rapids in 1946.

Betty was very active in the Methodist Church, serving on many committees, women’s groups and singing in the choir. Her sons remember her as being a wonderful mother, a super cook and a very avid reader. She was a member of PEO, the Eastern Star and First United Methodist Church in Coon Rapids.

Betty was able to remain active and in her own home up until about a month before her death. She died at the Thomas Rest Haven nursing home in Coon Rapids, IA, on Saturday, July 7, 2012. She was 95 years, 2 months and 23 days of age.

She was preceded in death by her parents; her husband, Wes Thomas in 2002; a sister, Margaret Pennell; two brothers, Raymond and Mark Tumbleson; and a daughter-in-law, Norene Thomas.

[Source: http://ohdefuneralhome.com/sitemaker/sites/OhdeFu1/obit.cgi?user=659612Thomas
extracted 12 Jul 2012 - Photo also from this page. Thanks to Ruth Ohde and family.]