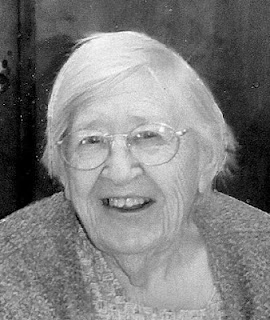 Last Thursday, I posted a 1954 photo of the Smith siblings, including Max and my Dad: 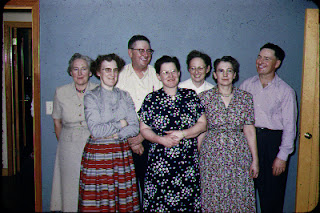 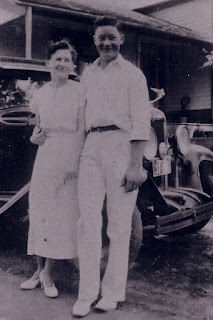 Here were Max and Orrin on their 50th Anniversary.

Here is a recent photo of Max (top of page) with the death notice published in Lake Havasu City News.

Here is the Obituary:

Maxine married Orrin Hilgenberg on December 16, 1936 at the Trinity Lutheran Church. In the first year of their marriage, Maxine would get up at 5:00 AM with Orrin and went with him to pick corn by hand. As a wife and mother, Maxine would do whatever needed to be done, even to cultivate corn, bail hay and milk cows. She and Orrin owned Hilgenberg Trucking Company where she managed the home office, keeping all the books, payroll and licenses in surrounding states for up to four trucks.

Maxine was involved in many activities, including County Extension work, 4-H club, Cub Scouts, committees at Trinity Lutheran Church and later Ascension Lutheran Church in Coon Rapids. When living in Lake Havasu, Maxine was involved at Mt. Olive Lutheran Church. She was on a bowling league for several years and loved her Garden Club. She was an expert in flower arranging and would enter contests over many years at the Four County Fair, winning numerous awards. They loved to have visitors and travel to see their children in California and Hawaii. Besides traveling, Maxine collected cookbooks and loved finding recipes in the paper. Cooking and crafts kept her busy until 2003, when she lost her eye sight.

Maxine is remembered for being a friend and having a wonderful smile. Even when she could not hear what was being said, Maxine would give a beautiful smile.