We arrived in West Branch in October 1968. As I mentioned on Thursday, we immediately set about building a house with the idea that we would be in West Branch for a long time. Well, such optimism is great, but it doesn't always come true.

With the 'green-eye-shade' firmly in place, metaphorically, I did get the company books in good shape over the coming months. The results of these efforts plus changes in the regulatory environment led to very unexpected changes in the near future.

Many facets of the company finances looked very good. Management was good, based on what was known going into this entrepreneurial set of activities. However, as Medicare and Medicaid regulations came into focus, it became obvious certain of Dr. Stuelke's business plan assumptions had turned out to be incorrect, and were not sustainable. The best example, as I recall a couple of details, was Physical Therapy. With two nursing homes, he had hired an outstanding physical therapist who also added excellent management skills to his team… full-time, 40 hours a week of billable time. The new regulations, however, turned out to only allow 8 hours reimbursement per week per nursing home (again, as I recall it now). That meant he was paying for three days of high-level medical care costs weekly that would not have an applicable revenue stream. The were other, similar situations, as well.

The meaning of this, and other related revelations, was that he either would need to add more nursing homes - or, sell out to a bigger operation that was capable of spreading their costs over a wider base. He was not in a position to buy even one more nursing home.

In the meantime, of course, our second chance at a third daughter had arrived. Arrion was born in September 1969 in the hospital near Kinnick Stadium in Iowa City. We have lots of photos of her arrival home, including visits by grandparents, aunts and uncles. This is the one, a few months later, that I was able to put my hands on, today. 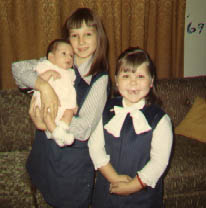 Dr. Stuekle was able to find a buyer for his nursing homes. Of course, they had their own business manager and accounting department. Our time in West Branch came to an end in about a year.

Peat, Marwick, Mitchell & Co., the CPA firm from GE, and here in West Branch, was opening a new Management Consulting firm 'alongside' their accounting services in the Des Moines office. I accepted a position as one of their first four consultants there. It seemed a perfect match (heard that before?!). [Richard Nixon had seemed a 'perfect match' for the Presidency recently, as well.]

We moved to Des Moines, actually suburban Urbandale, on Halloween. The older girls were a bit upset, we missed Halloween in West Branch, and, we missed it in Urbandale. Off to great start. On the flip side… we did stay in Urbandale from October 1969 until July 1983!  ;-)