Treasure Chest Thursday - Our Kinnick Cousins - over 50 year ago

A neat generational photo - Dec 1957
The more I look at this family photo, the more interesting it becomes - as a transitional piece; everyone is there - only one grandchild (first cousin) yet to be born. Grandpa and grandma, Paul and Dorothy KINNICK, are each still alive (center), with their three married children. The two older cousins have their future spouses as Christmas guests, but the first marriages are more than a year away. 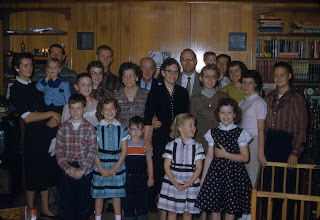 Leo (the oldest second generation here) and his wife, Ida, are in the center beside his parents. They had four children: Karen, with her future spouse, Richard (Dick), to the left of grma/grpa; Kathleen, second from right; Kelton (in front of Karen); and Karla (on right, front row). Eileen is the middle daughter, with her husband, Leverne (Pete) - he is holding their youngest, Paul - to the right, in the back row [these are my parents, I'm the oldest, taking the photo - my wife to be, Nancy, is standing in front of them]. Their other three sons are: Jim, to the far right; Tom, far left in front row; and Barry, center of front row. Edward (Buzz), the youngest son, with his wife, Colleen (holding their youngest, Lonnie - Bryan is nearly three years away yet) are to the far left. Their two girls are: Marcia, front row, second from left; and Cindy, second from right in the front row.