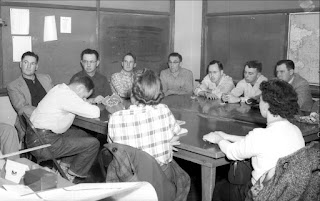 Here is a photo originally published January 14, 1955. It shows the CR CSD building committee, appointed to make recommendations on possible building a new community school building. At the time this photo was published, the committee had already met several times and this photo was taken at one of their final sessions. Pictured, in back around the table clockwise, were Laverne Smith, Myron Bundt, Elmer Stenstrom, Frank Clayburg, Al Headlee, Dean Lloyd and Glen Toyne. Also on this side of the table were Don Williams (head down), Mrs. Dale (Adalaide) Carpenter, and Mrs. Dale Betts. As part of their effort, members of this sub-committee visited new schools at Webster City, Eagle Grove, Humboldt, Lake View, Corning, Red Oak, Malvern, Avoca and Harlan for an idea of what a new school building should be like in Coon Rapids. According to a statistical report, the Coon Rapids enrollment was expected to be between 50 to 60 pupils in each elementary grade for the foreseeable future. Ultimately the committee recommended significant changes in the existing school building* while building a new elementary building to house kindergarten through sixth grades together with a lunch room. They suggested this new building should be erected on the two block area which was available to the district northeast of the existing school building. They recommended the new elementary building have one kindergarten classroom and two classrooms for each grade from first through eighth grade for a total of 17 elementary classrooms. *As far as changes made to the existing 1914 building, the committee concluded that the science room on the third floor was too small for a proper Physics or Chemistry course so they recommended removing the partition between the two English classrooms and making it into one science room. On the second floor the typing room was too small to handle as many students as could be supervised by the teacher, so they recommend- ed that the partition between the typing room and the principal’s office be removed to make one good classroom which would take care of typing class requirements as well as provide room for some tables for the bookkeeping students to work on. They also recommended turning over to the high school four elementary classrooms on the second floor. It should be noted the committee also recognized the need for an area for teachers to confer with parents when their classrooms are in use. Every school the committee members visited had a teachers’ lounge so they recommended that a small room on the ground floor be reserved as a teachers’ lounge.