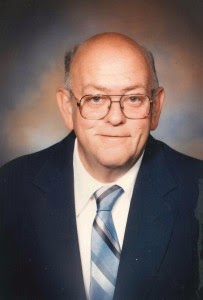 Dennis was my first cousin, once removed, and in my graduating Class of 1957 at Coon Rapids, Iowa. [He outlived his doctor's 6-8 months by nearly two full years...]


Dennis Ford passed away May 18, 2015, at the Greene County Medical Center in Jefferson.  He was 76 years of age.  Per his wishes, no services are planned at this time.  A Celebration of Life will be held in the near future.  Memorials are suggested to the American Lung Association or the American Cancer Society.
Dennis Kinnick Ford was born December 1, 1938, at Carroll.  He was the son of Lillian Kinnick Ford and Delbert Ford.  Dennis graduated from Coon Rapids High School in 1957. Through his high school years, he participated in 4-H and FFA.  Dennis attended Buena Vista College in Storm Lake, studying accounting and business.
On August 28, 1960, Dennis was united in marriage to Sandy Fagan at the Glidden Methodist Church.  The couple farmed around Coon Rapids for a time, then farmed south of Glidden for 10 years, where they also had a small dairy herd.  They lived near Dunbar Slough for a few years and then moved to Lake View, and then back to Coon Rapids.  In 1973 they made their home in Jefferson where Dennis remained for the rest of his life.
Dennis worked as a welder at Parker Manufacturing in Jefferson, and then worked for 24 years in building maintenance and engineering for the Jefferson and Jefferson-Scranton School District.  He retired in November 2000.
Together, Dennis and Sandy mowed lawns and did snow removal in the Jefferson community for more than 30 years.  Dennis enjoyed playing cards and was an avid reader of western books.  He belonged to First United Methodist Church where he served as a trustee and was head usher for many years.  Dennis volunteered throughout the community by delivering congregate meals, working for the food pantry, Greene County Medical Center auxiliary, and securing  hosts for the seasonal operation of the Mahanay Bell Tower.
Dennis was a member of Morning Star Lodge #159 A.F. & A.M. (Masons), Za-Ga-Zig Shrine, and the Odd Fellows Lodge.  He loved being around people.  Comaraderie and service to others was important to him.
Surviving are his wife Sandy Ford of Jefferson; children Jeff (Terri) Ford and Deborah (Don) Wills of Jefferson, and Gene (Greg Lacey) Ford of Des Moines; grandchildren Jennifer (Brent) Oakes of Paton, James (Mindy) Ford, Josh (Jessica Wolf) Ford and  Megan Vaughan, all  of Jefferson,  and Jada Lacey of Des Moines,; six great-grandchildren; and other relatives and friends.
The family is assisted by Slininger-Rossow Funeral Home of Jefferson, 515-386-2171.
Source: http://greenecountynewsonline.com/2015/05/19/dennis-ford-1938-2015/
Families are Forever! ;-)
Posted by Dr. Bill (William L.) Smith at 3:00 AM