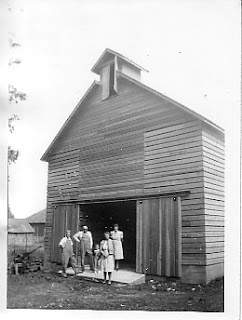 [Paul Kinnick, bald bare head, and Dorothy Kinnick (back, right);
I am no longer able to remember the others in this photo -
but, oops?, it may be my mom and dad and me! I cannot tell for sure]


You may recall my post on Sunday, April 15, 2012 about residences of my maternal grandparents, Paul and Dorothy (Sorenson) Kinnick. They lived on a farm they had bought in 1941-42 (still trying to pin down the date) on the west side of the road to Glidden from Coon Rapids (Iowa) that they lived in until June of 1948. Even though they lived there for 6-7 years, we always, in the family, referred to it as 'The Harvey place' making reference to a previous long-time member of the community who had lived there earlier - Ray Harvey (he had been with the Coon Rapids Post Office).

This photo is of the newly built Corn Crib building which was the major improvement Paul and Dorothy made to the property while they lived there. I clearly remember the pride they felt, and this photo also clearly shows that. Their son, Edward, we have always called him Buzzy, went to High School from this farm from 1942 to 1946. He returned here from his eighteen or so months U.S. Army service in Japan in January 1948. When he and Colleen Davis were married in June of 1948, they made this their home and his parents moved into a trailer house parked north of my parents' home on our farm a few miles east of this location for a while before they bought the little house in Bayard (August 1950).