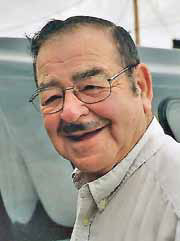 Ralph and his wife, Winona, were First Cousins, Once (one generation) Removed. Winona is the daughter of Louise (Sorensen) Nielsen who was the sister of my maternal grandmother, Dorothy (Sorensen) Kinnick.

Ralph Huffman Jr., the son of Ralph, Sr. and Goldie (Hammer) Huffman, was born September 9, 1929, at his parents’ home near Scranton, and died March 19, 2018, at the Friendship Home in Audubon, at the age of 88 years, 6 months, and10 days.
The family moved to Farlin, in 1936 where he attended school until the family moved to Coon Rapids, where he attended Coon Rapids High School. On January 3, 1947, he enlisted into the United States Army. During his tour of duty he was stationed in Panama. On January 5, 1950, he was honorably discharged and returned to Coon Rapids where he farmed.
On June 5, 1952, he was united in marriage to Winona Nielsen. They were blessed with two children, Patti and Larry. They farmed near Coon Rapids until they moved to Audubon in 1954. Ralph was employed as an auto mechanic for over 40 years working with Searl’s Chevrolet, Conklin Ford, and Larsen Ford. He retired in 1993 then worked part time at the Audubon County Courthouse until 2003.
Ralph and Winona enjoyed riding their motorcycle to motorcycle rallies in different parts of the country. He enjoyed stock car races and watching his son Larry race motorcross. He had a small woodworking shop and made many different items and enjoyed going to craft fairs. He loved being outside and enjoyed hunting and fishing, but most of all mowing his four acres of their lawn.
Ralph was preceded in death by his grandson Damon Huffman; his son-in-law Russ McCune; his parents; his brothers: Virgil Huffman, Kermit Huffman, and Ronald Huffman; and his half-brothers: Pat Lyons, Willard Lyons, and Richard Lyons.

Survivors include his wife Winona Huffman of Audubon; his children: Patti McCune of Omaha, NE, Larry and wife Sherrill Huffman of Audubon; his grandchildren: Christy Trout of Omaha, NE, Carrie and husband Jason Riley of Sarasota, FL, Kalin Huffman and fiancé Mike Birkel both of St. Paul, MN; his great grandchildren: Bryce Trout, Brenden Trout, and Brinley Trout all of Omaha, NE, and Cadyn Riley of Sarasota, FL; his half-brother Bill Lyons of Bedford; his sisters-in-law and brothers-in-law: Annie and husband Jerry Vincent of Jefferson, Judy and husband Dave Marques of Fort Collins, CO, and Marie Nielsen of Jefferson; nieces, nephews, other relatives and friends.