100 Years Ago This Week - In our Hometown - Coon Rapids, Iowa

100 Years Ago This Week
In our Hometown
Coon Rapids, Iowa

Norman D. Wilson died at his home Monday night, being in failing health for a year or more, having kidney trouble. The community has sustained in his death the loss of an excellent citizen. He was a pioneer who helped largely in the development of the locality.

He was a staunch republican and for many years prominent in party conventions, county, state and also a faithful member of his church at the Star, always exerting good influence. He was a printer before the war and was therefore always interested in newspapering and always made at home in the print shops of the county which he visited often. He was a
loyal member of the Perry Wright Post and upon the death of “Dad” Mowder became color bearer.

A short history of his life, prepared a year ago and published in the Enterprise, is here re-produced.

Norman D. Wilson was born in Illinois, June 28, 1844. Following the trade of printer beginning his apprenticeship when he was but 10 years of age, which trade he followed until 1876, his last work being on the Prairie City News.

Enlisted in 1864, he was a member of Co. H 134th Illinois Infantry and was elected corporal on May 20 of same year. Come October, when the governor of Missouri wired the governor of Illinois that troops were needed to defend St. Louis against the army of Gen. Price, the entire nine Illinois regiments, which had just been mustered out, volunteered to protect Missouri’s capitol and arrived at St. Louis Saturday of the same week. They remained in Missouri about two weeks, Gen. Price in the meantime having retreated, and an engagement was thus
avoided. The regiments returned home, not receiving any pay for their two week’s service in protecting St. Louis.

He served under Gen. Rosecrans. Mr. Wilson has the distinction of receiving from President Lincoln, on the part of Governor Olegsive of Illinois and signed by President Lincoln and Secretary Edwin M. Stanton, a certificate of thanks for valiant service rendered as 100 day men in the closing days of the war.

Mr. Wilson is the only veteran at Coon Rapids or in the locality who has such a certificate. Of course he prized it very highly.

Mr. Wilson followed farming since moving to Coon Rapids in 1877, owning a good farm north of town known as Far View, from which point one can see a point for four miles of Panora, 25 miles distant, Coon Rapids, Scranton, Glidden and on a clear day almost to Jefferson.

The funeral occurred yesterday atthe Star church, a very large number of friends attending, the sermon being preached by his pastor, Rev. Carl Brown. The remains were interred in the Coon Rapids cemetery. The Veteran Drum Corps took a prominent part in all the services.

*****
A tribute to Norman D. Wilson was recently published by his great, and great-great, granddaughters, Nancy Smith and Annette Lamb. It is available to everyone at Amazon.com. 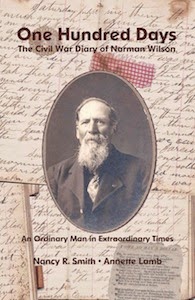